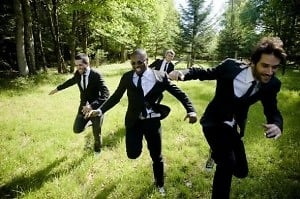 We are giving away a pair of tickets to the Forro In The Dark show tomorrow at Joe's Pub to one lucky GofG reader! To enter to win, all you've gotta do is tweet!

To enter just Retweet: "@guestofaguest and @forrointhedark, I want to go the show tomorrow @joespubnyc!

See below for details...

Forro in the Dark is the hip-swiveling, dance floor-filling, rural party music of Brazil’s northeastern states. And Forró in the Dark is the collective of four New York-based Brazilian ex-pats –Mauro Refosco (zabumba drum and vocals) Davi Vieira (percussion and vocals) Guilherme Monteiro (guitar and vocals) and Jorge Continentino (piano flute, sax and vocals) - who are updating this traditional sound for the 21st century. Their special midnight show at Joe’s Pub on December 10th will be a must-see dance gathering to remember!

We will be combining the ReTweets we receive into a computer generated sweepstakes system and picking the winners so the more you tweet at us, the better chances you will have.  We will be picking the winner at 3pm today so get tweeting! (Note: must be a follower of @guestofaguest and @joespubnyc on Twitter to win).

These two tickets could be yours!

If you are not today's winner and want to but tickets, just click HERE!