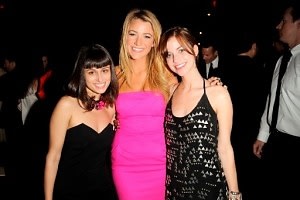 GofG sat down recently with the Sophie Buhai and Lisa Mayock, the ladies behind the downtown cool fashion line Vena Cava. Lisa and Sophie met in California, bonded at Parsons and garnered critical acclaim with CFDA award nominations and serious street cred.---

[Sophie and Lisa with Blake Lively at the CFDA Awards last year. Photo by PMc]

GofG: Tell me a bit about yourselves? When did you first realize you wanted to be fashion designers?

Sophie: I remember being in kindergarten and thinking I wanted to be an artist because I had an idea of what outfit an artist would wear. Tight splatter pained jeans, a white men’s shirt and black stilettos. Then I realized as I got older I just wanted to be a fashion designer, and that’s really what that meant.

What was your experience like at Parsons? There has been a lot of discussion regarding the pros and cons between the different school models, and whether it is beneficial to attend a formal institution at all. Did you find your experience beneficial? Would you have changed anything?

Lisa: Parsons was a very valuable experience for both of us. Learning the technical construction of making a garment was best for me in a formal setting. Just having the time to mess around and just create for four years was incredible. We both feel so lucky to have gotten so much time to do that, and be around other like-minded people to critique our work and add to that creative energy. It was pretty incredible. We’re both in touch with a lot of people – both peers and professors – from that time.

You began your line three weeks after you graduated from Parsons. What made you take that leap?

Sophie: We really just wanted to make a collection to show our friends at a BBQ. It started out as a side project while we both worked at thrift stores and procrastinated getting real jobs. Then it turns into something bigger and we were pretty stoked when that started to happen. 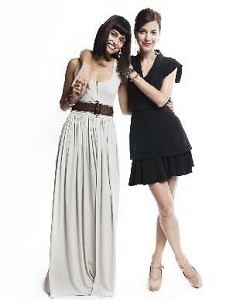 Are you happy you chose to begin your own, independent label? Looking back would you have done anything differently?

Lisa: I wouldn’t change a thing. At the beginning of our label we felt very frustrated by how slow the process seemed. But in hindsight if we had gotten a big break early on I think there’s a very good chance we would have blown it.

Would you ever allow your brand to become part of a fashion or luxury conglomerate?

Sophie: If we were able to continue to have control over the design and have more time to be creative, then hell yes. We like being small, but having the expertise and support of a larger company might allow us to spend more time on design and special projects.

Was the best thing you’ve ever done or accomplished?

Sophie: Just getting to go to work everyday and put ideas into actions. As corny as it sounds getting to do your childhood dream is pretty amazing.

Would you have done differently?

Sophie: Maybe we should have hired more people early on instead of killing ourselves and getting premature grey hair. I speak for myself here, Lisa’s hair is gorgeous.

What has been your biggest inspiration?

Lisa: Right after we started the business Sophie met with a former industry bigwig – a guy who had run huge corporations and was just a big player in the 80s and 90s. I remember asking her how the meeting went, excited that we might have gotten some great advice or something. He didn’t mince words. He told her we would never succeed. Every time I heard something like that it just fueled this drive we both had to make it work. 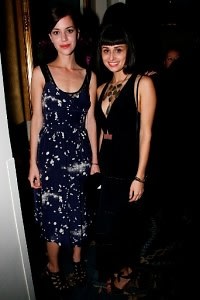 Who are the women you design for?

What was your inspiration for the FW10 collection?

Sophie: We were really interested in the craft movement of the 1970s. We looked to a lot of famale fiber artists who studied at the Art Institute of Chicago under Joseph Albers. Sheila Hicks was a big inspiration, her work is amazing. She was one of the first people to take weaving off the wall and turn it into sculpture. Some of the work from that time is this great combination of stark minimalism and bazaar crafty.

Favorite piece, item or look from the collection?

Lisa: Favorite piece would have to be this hooded cloak that’s one part ren fair, one part snuggie.

What is inspiring you at the moment?

Can you give us any hints about what to expect?

Sophie: We are designing in LA so I think you’ll see some references of our favorite moments in LA culture. There will be some Bettie Davis nods, some LA 84’ Olympics graphics, some 30s gown details, so David Hockney colors, and some cool and breezy silhouettes. 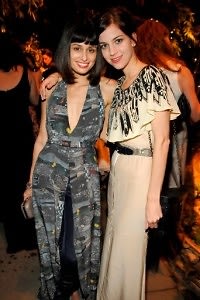 What is a typical day like for you ladies?

Having been in New York for 15 years, you must have your favorite spots – care to tell us some of them?

Lisa: I’m big into people watching so I’d have to say in my neighborhood, the B61 Bus. It goes through Greenpoint, who’s elderly have the best style in the city. I also love Amarcord on Bedford and Motorino on Graham for good ‘Za.

Favorite thing about being designers?

Lisa: Being your own boss and being able to rationalize shopping as ‘work.’