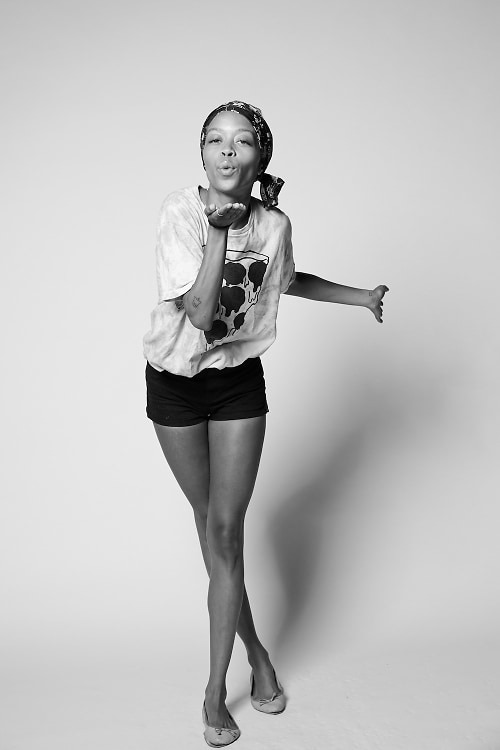 When Brandee Brown showed up to set rocking a pizza-printed graphic tee and a spirited disposition we knew she was one cool cat. Brandee is a model, director, actress, creative muse, photographer, filmmaker, girl-about-town, badass, "and a human...for now!" Recently, Brandee landed a campaign with DKNY FW '14, adding to her list of work with Rachel Roy, Club Monaco, Cole Haaan, Gap, Puma, and more. Brandee's been featured in numerous publications, including Purple, British Vogue, Paper, Glamour, and as a Nasty Gal Role Model. You may spot Brandee out and about with some of NYC's coolest ladies, including friend and DJ Chelsea Leyland. We can't get enough of Brandee and her wild personality, and we're certain her career is one to watch. For more reasons to know Brandee, including the unique reason behind her favorite childhood song, keep reading!

"You do not have to adjust your screen! I most def just write like a weirdo...njoy!! xx bb" 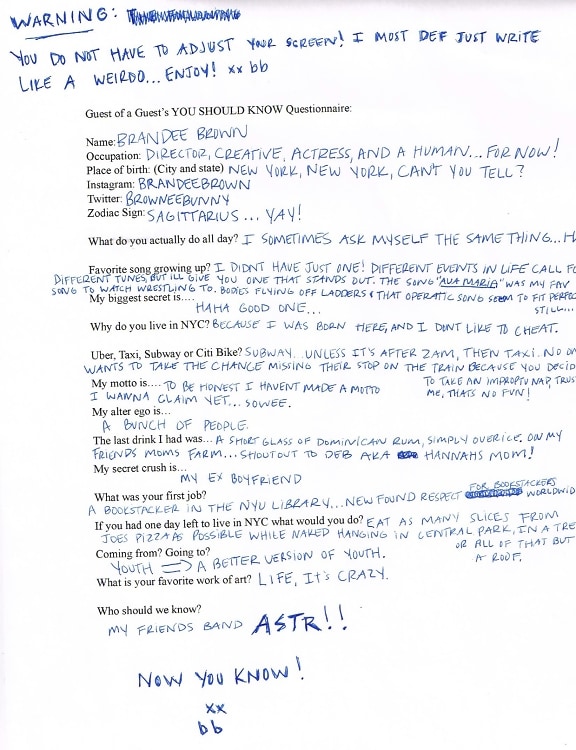 What do you actually do all day? I sometimes ask myself the same thing...

Favorite song growing up? I didn't have just one! Different events in life call for different tunes, but I'll give you one that stands out. The song "Ave Maria" was my fav song to watch wrestling to. Bodies flying off ladders and that operatic song seem to fit perfectly."

My biggest secret is... Haha good one...

Why do you live in NYC? Because I was born here, and I don't like to cheat.

Uber, Taxi, Subway or Citi Bike? Subway, unless it's after 2 AM, then taxi. No one wants to take the chance missing their stop on the train because you decide to take an impromptu nap. Trust me, that's no fun!

My motto is... To be honest I haven't made a motto I wanna claim yet...sowee.

My alter ego is... A bunch of people.

The last drink I had was... A short glass of Dominican run, simply over ice, on my friend's mom's farm...shout out to Deb aka Hannah's mom!

My secret crush is... My ex-boyfriend

What was your first job? A book-stacker in the NYU library... New found respect for book-stackers worldwide

If you had one day left to live in NYC what would you do? Eat as many slices from Joe's Pizza as possible while naked hanging in Central Park, in a tree. Or all of that but on a roof.

Coming from? Going to? Youth - a better version of youth.

What is your favorite work of art? Life, it's crazy.

Who should we know? My friend's band ASTR!!