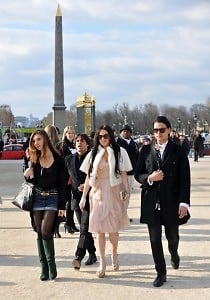 [Lohan and entourage are finally leaving.]

Paris Fashion Week is drawing to a close.  We suspect you may be worried that when your friends ask who did what, you'll just keep repeating "It all had a certain je ne sais quoi" in a hapless, faux-sophisticate effort to keep them from finding out that you spent the whole week trying to meet cute with Carla and Sarkozy, instead of sitting in the front row. Never fear! We recap the big stuff for you:

The Clothes: Gaultier turned out a brilliantly colored and folkdress-inspired multicultural mishmash of a collection. It may not have been the most novel, but it was certainly eye-catching and charming - and the abundance of layers guarantees that there are plenty of lovable items mixed into every look.

The Crowd: Some complained that the anti-fur protesters outside were obscenely loud, but inside things seemed to unspool smoothly. Chinese actress and photogs' darling Fan Bingbing and Australian pop star Micky Green sat in the front row, along with Jane Birkin, who frenetically jotted notes throughout. What are you plotting, Birkin?

The Clothes: Atop an illuminated floor inspired by 2001: A Space Odyssey marched models clad in color-blocked sweaters, sweater-dresses, and sweater-pants, along with floaty perforated dresses and architectural suits with wordy pop-art accents.

The Crowd: NOT CARINE ROITFELD. She's banned from Balenciaga, which also no longer advertises in French Vogue or lends items to the magazine. No word on what sparked the feud. So who was in attendance? Many, many actresses, almost all of them French: Lou Doillon, Charlotte Gainsbourg, Amir Casar, Clemence Poesy, Marie Josee Croze, Maggie Cheung, and Inglourious Basterds actress Melanie Laurent all took in the show.

The Clothes: Viktor & Rolf gets the award for best show, if not for best clothes. In fact, the choreography had Paper Magazine tweeter Mr. Mickey "gagging with delight": The designers stripped layer after layer off of model Kristen McMenemy and sent the pieces down the runway on other models, before finally heaping the garments back on McMenemy. It was fashion spectacle at its best, though the fashion itself, while cutely convertible (A cape is actually a coat! A skirt is a vest! Up is down!), didn't make a spectacular impression. But damn, the lady at the center of it all looked good in her spangled bodysuit. 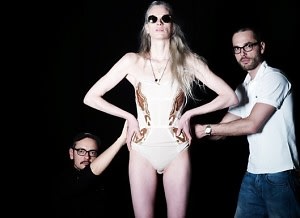 Chronologically, this woman is old enough to be my mother; aesthetically, I'm her great-uncle. The hunchbacked one. [Photo by Courtesy Photo]

Among the guests was Beth Ditto, who appeared as if from a Fritz Lang fantasia: 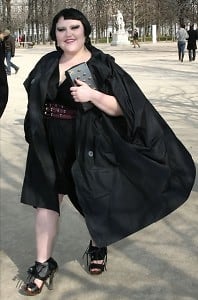 The Clothes: Comme des Garcons may be aggressively avant garde, but past seasons' themes have trickled down to major retailers' wardrobes. If that trend holds true, the puffy outerwear so ubiquitous every New York winter may get even more swollen.  This season, designer Rei Kawakubo rolled her models out in garments so heavily padded that they resembled everything from bulging muscles to fungal growths, at times exploding out of seams. Cathy Horyn's a fan, while Women's Wear Daily calls the style "Michelin Man dressing." Our aversion to having stranger's giant coats force us off of curbs and into traffic renders us automatically hostile toward excessive bulk, but we still like the unexpectedness and creativity of the collection. Is it wearable? Oh come on, couture needs to be wearable like Ungaro needs to re-hire Lindsay Lohan.

The Crowd: Audience members complained that the seating was tight, and SHOWStudio tweets that, once the runway cleared, the lights immediately went down and the music stopped short. Brusque.

Let's cut to The Intrigue: Lindz wasn't even invited to the show! Ungaro claims two seats were reserved for her, but word on the street has it our favorite rarely-redhead was iced out. Designer Estrella Arch, for one, looked way happier taking her bows sans Lohan than she did last season: 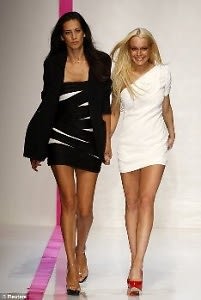 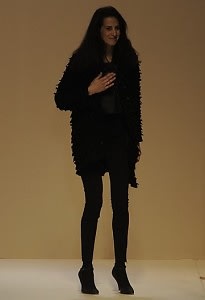 As we noted in last week's Quote of the Week, LL at least seems to realize that designing is, um, tricky.

The Clothes: This year's garments were an improvement over last year's incredibly unpopular  Lohan-influenced collection, but they didn't exactly make one want to rush the runway, rip the clothes off the models, and writhe on them euphorically. In fact, every thing - the pretty colors, the cigarette pants, the flirty prints, and the little black dresses - seemed over-familiar.

The Clothes: Designer Alber Elbaz tarted up his lean, dark designs with heavy tribal accents, fur, and feathers, but the silhouettes remained simple and elegant. Many of Elbaz's garments began as a single piece of cloth, but oh, the transformations that piece underwent!

The Crowd: Jade Jagger, Jared Leto (in the same studded skinny jeans he wore to the Dior show, and in a hairstyle that is pitting brother against brother in the tweetosphere), Cecile Cassel, Clemence Poesy, Nathalie Baye, and Juliette Binoche were all in attendance.

[Jared Leto is having the best fashion week ever]

The audience was reportedly so overbooked that Danielle Steele's seats were accidentally given away, and the woman who brought us Toxic Bachelors had to be squeezed in at the eleventh hour, along with Ines de la Fressange. Let me remind you what Danielle Steele looks like: 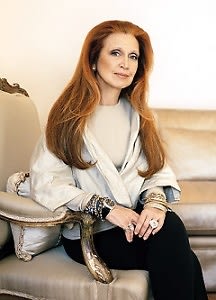 Does this look like a woman who would squeeze into a seat? We don't believe any of it.

Westwood smiled through her post-show bows, even when hit in the face by a stuffed cat.

The Crowd: Beth Ditto loved the models' Errol Flynn mustaches. "Truly, no irony: They're one of my favorite things, girls with mustaches. That's why I never wax," she announced. Director Justin Theroux, in Paris to do recon for a Zoolander sequel, announced that he hopes to lasso Terry Richardson for a cameo in the movie. From the looks of Richardson's photo diary, Theroux's efforts might bear fruit: 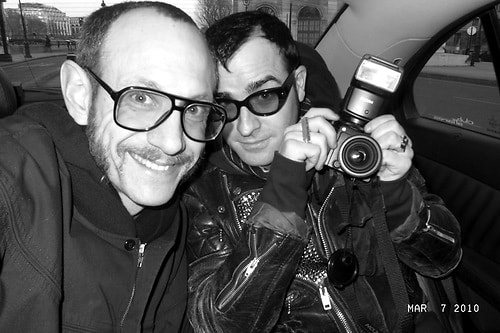 The Clothes: Like Gaultier, Galliano went multiculti with orientalist overtones, although his palette was more restrained and some of the garments more stiffly structured: The Fall/Winter collection featured pieces molded from boiled wool mixed in with delicate evening gowns.

The Crowd: Beth Ditto was front and center, fanning herself furiously, which Women's Wear Daily attributes to runway's massive glitter explosions. Terry Richardson provides photographic proof of the glitterblast that left even those smashed at the back of the audience coated in silver: 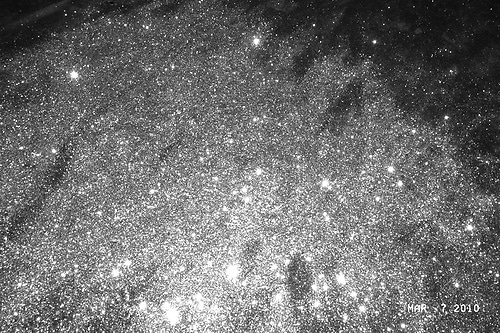 Clothes: They were fine, and furry enough to warrant many, many Hoth jokes from the George Lucas fans in your posse. Let's cut to the chase: There was an iceberg onstage! An actual iceberg! From Sweden! It was icy! And berg-some! And, as you can see if you click on the thumbnails above, it melted all over the runway. 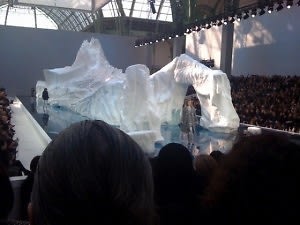 [Photo by Claire from The Fashion Bomb]

Incidentally, this was our favorite part of the entire show: 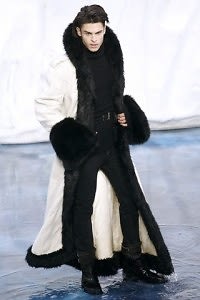 We were disappointed that he didn't enter the stage astride a polar bear, but we forgive him, for he reminds us a little of David Bowie in Labyrinth.