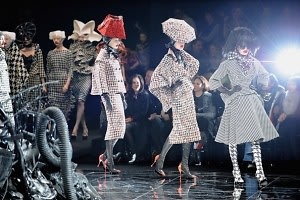 [Photos via Getty] Paris Fashion Week is well underway, and the most memorable of all shows so far has to be Alexander McQueen, who proved that a recession is the perfect opportunity not to play it safe and put on an even more over the top show. Set next to a backdrop of what can only be described as a beautiful heap of recycled garbage, McQueen's girls were decked in outfits fit for an old school Gothic horror movie.  More story and photos below... Birds were a common theme as dresses were made of thousands of feathers and a recurring eerie print of black birds in flight, reminiscent of Hitchcock's The Birds. Continuing with his "recycling" theme McQueen's girls donned Philip Treacy hats made out of stacked umbrellas, plastic wrap, garbage bags, and other fabulous objects never actually worn on a head, and model's faces were painted pale white with huge vampy red lips. 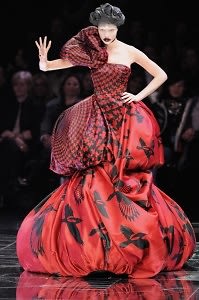 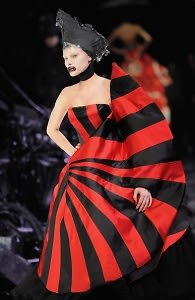 Mcqueen's shows are always more similar to a theatrical performance with his costumes being more like walking art than things you'd actually wear on the street. With a constant owde to drama, Mcqueen proves that a time when you may have to "recycle" a few of your own outfits you might as well do it in style. Times aren't always easy and art doesn't always have to be beautiful, but sometimes it's more fun to play on the dark side. 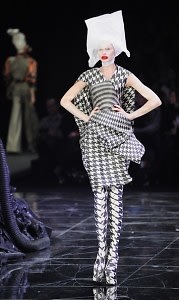 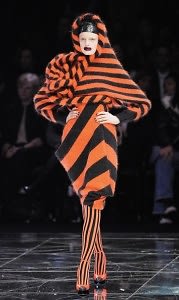