Congrats are in order for our friends at Groupme. Skype just acquired the hot messaging service. Also, teachers are using technology in amazing ways in the classroom, Steve Jobs continues to reign over the U.S. and China, the new $4600 Dior cell phone, and much more in today's tech round-up. 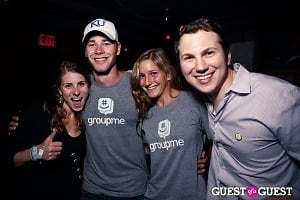 1. Skype has acquired the year-old messaging service Groupme. Though specific details regarding the deal have not yet been disclosed, Groupme was noted as the ideal mobile addition to help skype reach its goal of one billion users. Groupme just celebrated its one year anniversary and the release of its 3.0 version at Good Units last week.  View photos of the event HERE. This Skype news is sure to help. [Engadget]

2. Technology being welcomed in the classroom has increased in recent years. Remember when you weren't allowed to bring your cell phones in class? Well that may be over. The Huffington Post gathered some innovative ways teachers are implementing social media and technology into their lesson plans.

They’re using smartphone apps to teach the laws of physics, iPads to practice penmanship, and Foursquare to guide students around unfamiliar college campuses. Digital whiteboards and e-clickers add an element of interactivity to tests and quizzes.

3. Apple still finds a way to rule in China...even though they may rule over us soon. Its obvious that Apple is very popular in China with proof provided by the fake Apple stores that popped up around the country. Apple's third quarter China sales outstripped that of Lenovo's first quarter results. [Engadget]

4. Could Facebook activity on the decline? According to a recent study performed by the Global Web Index, Facebook activities were charted from July 2009 compared to June 2011 and were reported to be declining. Activities like virtual gifting are not only falling faster in the U.S. than elsewhere, but are declining even more among under-30 college-educated users. [Mashable]

5. Would you buy this Dior mobile phone for a whopping $4600? Maybe if it told the future. [Colette]

6. Speaking of mobile phones, are you ready for the iPhone 5? It will be available for pre-order September 30th and on sale in stores on October 7th. Apple's aiming to launch the 3rd installment in their iPad series in 2012. [WSJ]

7. This may be the end of troublesome telemarketers. [Buzzfeed]