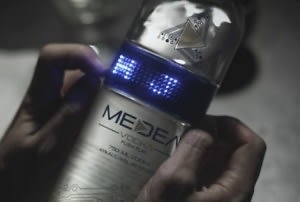 There's nothing more Russian than gulping vodka while reading Dostoevsky. Although the new Medea vodka bottle lacks space for the full text of Notes from the Underground, its interactive LED screen allows for the reading of Twitter-length musings while babushkas drink you under the table.

Earth has Tim Goldburt and Matt Sandy, below, to thank for Medea. A bottle, which sells for $40, can include up to six personalized messages on its "Moscow-meets-Times Square" minitron news ticker. You can be slightly more verbose than on the 140-character Twitter, since each random message on a bottle can extend to 255 characters.

We gave the format a whirl and found the limit might be too generous:

why is vodka the only liquor to inspire pitches (which aren't gimmicks) like these? (see: wass stevens as wodka vodka spokesman, spike lee's brooklyn-themed (and designed) absolut line etc. where's the marketing love for bourbon, cognac, bathtub gin etc.?

would marriage proposals that scroll across a vodka bottle be better read before or after the rapid consumption of said bottle? what if you're popping the question to more of a white wine spritzer kind of gal? or, sorry gloria, budweiser kind of fellow?

if a birthday greeting is broadcast on a vodka bottle, 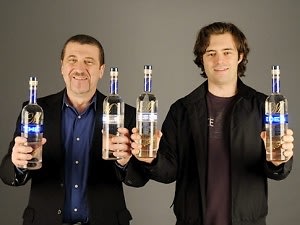 one presumes the birthday party revolves around drinking lots of vodka. which, as so many college freshmen learn, guarantees never touching vodka again. bad marketing? or is medea better than popov??

how the hell did i lost my iphone/credit card/apartment keys/dignity/ability to speak english/commitment to never smoking cigarettes/shoe/eyebrows/passport i was using in lieu of a long lost driver's license/dinner in the middle of the street last night?

shouldn't messages of a uniform 255-character length all take up the same amount of space and end in a straight line? is Wordpress messing with me? twitter's character counter flawed? am i so bad in math i can't correctly add 2 twitter counts to make 255?