Once Mayor Bloomberg's term is over, he will be leaving behind some pretty big tech boots for our next elected mayor to fill.  The mayor loves social media so much that he declared April 16th to be Foursquare Day and has even hired a chief digital officer to be on his team. Which leaves the question, who will fill Michael Bloomberg's big techy boots?

Technology and social media has taken over the world and has even inserted itself into the heart of Mayor Bloomberg. The mayor has invested in several start-ups and encourages the public to start their own. He has made the use of technology important and a priority to the city's growth and well-being.

Check him out 'checking in' to get a flu shot at Duane Reade... 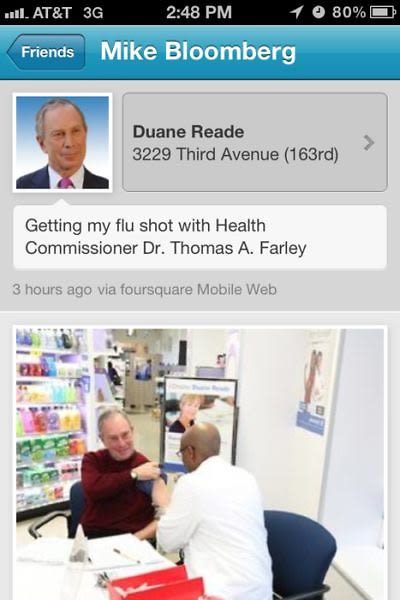 He was even present at the opening of the Twitter office in NYC along with twitter founder Jack Dorsey. #technerd

From nerds to the techy savvy and even the average resident, we all need our daily fix or we forget how to function (sad but a new reality). The city's next elected mayor really needs to step it up with his or her's integration and involvement in the growth of technology within the city. The demand for more is growing and we, as fast paced New Yorkers, need a mayor who can bring this to us. So far none of the candidates have looked promising on that front.

Neither Bill Thompson, Scott Stringer, Christine Quinn, John Lui, Tom Allon or Bill de Blasio have showed their techy side yet - they better take note and hire a some savvy nerd stat to bring them up to date.