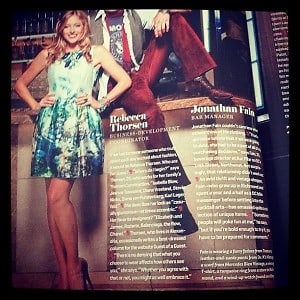 Our fashion columnist, Becca Thorsen, made the cut for Washingtonian Magazine's Style Setters! The 15 people chosen for the annual list, which started in 2009, are movers-and-shakers that know how to tie a bowtie and the difference between cordovan and brown.

Becca wore a Zara dress, TopShop shoes, and a BCBG necklace (all from her own collection) for the shoot, which was shot by Greg Powers at the Howard Theatre for the September issue.

For GofG, Becca picks the ten best dressed people at events on the junior social circuit in her column, Becca's Picks. The column is evolving to include other fashionable top tens, like where to go for Fashion's Night Out: Georgetown.

"I'm just super excited to be included. It was such a fun day doing the shoot, and it has been a pretty positive experience so far," Becca told Guest of a Guest. "It's always nice to get recognized for something you enjoy."

This isn't Becca's first hat tip to her great taste. She recently snagged the top prize on Revamp.com's first--and as of now, only--best dressed list, for a black Juicy maxi jumpsuit she wore to the usually colorful Sinatra Soiree.

The list culminates with a small party later this month.