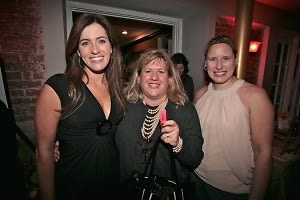 Give Me Seconds: Heller's Bakery.

The more than 110 guests also had a hand in voting with b+l bakehouse taking home the People's Choice award.

Owners of the Dupont Circle lounge, Seth McClelland and Niko Papademetriou, mingled with the guests who sipped on signature One Lounge cocktails as well as wine and beer. Besides ticket sales to the event which included a chance to win a 7-day cruise, a silent auction helped raise more than $7,000 for the Crohn's & Colitis Foundation.

Everyone went home with a Georgetown Cupcake. Sweet!