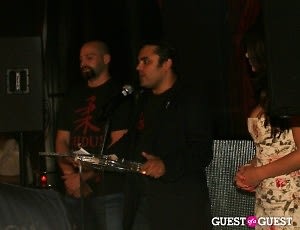 As President Obama spoke from the White House to the nation on Wednesday on his plans to withdraw 30,000 US troops from war-torn Afghanistan by next year, across the street at POV at the W Hotel, a different message was being delivered by Hamed Wardak, the son of an Afghan Cabinet Minister: "help refugees, like me."

While Mr. Wardak is in fact a refugee from Afghanistan, having come to the United States at age three, he is also profiting from the War in Afghanistan, now in its 10th year, to the tune of almost half a billion dollars, according to the Washington Post. In addition, he is connected to lobbying efforts (spearheaded by Patton Boggs, LLC – a sponsor of Wednesday’s event) to keep the United States involved in the Afghanistan conflict, according to The Nation.

Though Washington Life magazine, another sponsor of Wednesday night’s "Blue Key: Miami to DC" event, called Wardak a "philanthropist," the magazine makes no mention (and neither did Wardak) of his McLean-based "transportation company" that scored up to $360 million in defense contracts for safe transportation for U.S. trucks and convoys in Afghanistan. As the Washington Post wrote last year in March, in a hard-hitting article entitled "Afghan Corruption: How to Follow the Money?" Wardak is profiled as a man of many connections, possibly to the Taliban and corrupt Afghan officials, and mysterious spending and accounting. Wardak’s money comes from a transportation company that, according to the Washington Post, is based in "a bare bones office" in McLean, VA "with no trucks." 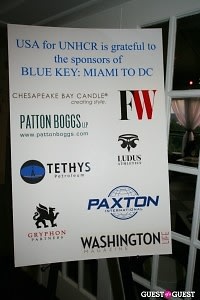 Instead, writes the Post, "Wardak sits atop a murky pyramid of Afghan subcontractors who provide the vehicles and safeguard their passage. U.S. military officials say they are satisfied with the results, but they concede that they have little knowledge or control over where the money ends up."

According to senior Obama administration officials, some of it may be going to the Taliban, as part of a protection racket in which insurgents and local warlords are paid to allow the trucks unimpeded passage, often sending their own vehicles to accompany the convoys through their areas of control.

Mired in scandal, Wardak would seemingly like for everyone to associate his name with Ludus Athletics, a new clothing company he founded recently in Miami. At this time, the Ludus Athletics Web site is merely a full-page advertisement for Wednesday’s event. He would also seemingly like for you to associate his name with peace efforts between the United States and Afghanistan. According to HamedWardak.com, in which he bills himself as CEO of Ludus Athletics (again, failing to mention NCL Holdings), Wardak says that he "plays in active role in the US-Afghanistan relations. He is an advocate for the future of Afghanistan and has made major donations to cultural exhibits in the US and to nonprofits providing educational services in rural areas of Afghanistan. Ludus and Hamed currently support USA for UNHCR to provide humanitarian relief to millions of refugees." Wardak and Patton Boggs, LLP, deny any wrongdoing.

Wednesday night’s event was evidence that Wardak would like to downplay his association with NCL Holdings as he hits the DC social circuit, despite raking in hundreds of millions in U.S. taxpayer dollars for his work with NCL Holdings. NCL Holdings is not on the official event invitation as a sponsor or host. However, the event was, in fact, sponsored by Patton Boggs, LLP; Tethys Petroluem, a Kazakhstan-based oil and energy company; Washington Life magazine, Gryphon Partners, and others.

According to a 2009 article in The Nation, in a piece called "Afghan Lobbying Scam," Aram Roston paints an unflattering picture of both Hamed Wardak’s business and lobbying efforts, and that of Patton Boggs, LLP:

"At the heart of the scandal is the Defense Department's $2.2 billion Host Nation Trucking contract, a military logistics operation launched with six major contractors, a number that has since risen to eight. One of the contractors under investigation is NCL Holdings, a US firm headed by Hamed Wardak, the Afghan-American son of Afghanistan's defense minister, Gen. Abdul Rahim Wardak."(NCL denies ever having made payments, directly or indirectly, to the Taliban.)

But it seems Hamed Wardak was more than just a defense contractor with a budding business. Parallel to his business ventures, he's been running an aggressive foreign policy campaign in Washington to keep the US heavily vested in Afghanistan. A confidential lobbying memo obtained by The Nation shows that Wardak commissioned a blue-chip lobbying firm to push for an extended US presence in Afghanistan--a potentially lucrative outcome for NCL.

Earlier this year Patton Boggs LLP, Washington's most monied lobbying firm, established a nonprofit front group on Wardak's behalf to act as the "face" of a campaign for increased US engagement in Afghanistan, according to confidential legal records. Patton Boggs is heavily involved in foreign policy and has registered with the Justice Department as a foreign agent for governments and interests in Angola, Cameroon, China, Cyprus, India, Sri Lanka and Qatar, though not Afghanistan.

The documents obtained by The Nation are an influence-peddling playbook for the Wardak effort."

Dignitaries such as Zalmay Khalilzad, former US Ambassador to the United Nations, and Washington’s elite and social set nevertheless turned out on Wednesday to see the POV at the W Hotel "turned into an an ultrachic Miami lounge," as the event invitation promised. It was rumored that Ludus imported young Miami women up the East Coast to the Nation’s capital to dance scantily-clad in new Ludus Athletic wear, while Miami’s "top DJ’s" helped Ludus and other sponsors to convert the POV at the W hotel "for the night into the hottest club in DC." Other attendees and VIPs listed on the event press release include Qubad Talabany, son of President Jalal Talabany of Iraq, and Roman Popadiuk, US Ambassador to Ukraine. There were also assorted Ultimate Fighting Championship celebrities in attendance.