We understand you are an artist, and a musical artist at that.  Therefore, we also understand it's not entirely out of the question that you use drugs.  We don't judge.  But we do get annoyed when your alleged drug use compromises your ability to entertain us.

Because Mr. Mau5 is super effing popular, he sold out all three shows.

Wednesday night he killed it.  Thursday night he only performed for 90 minutes-ish.  Friday night was when the shit really went down. 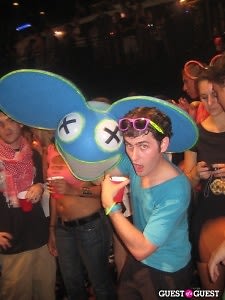 He went on at 11 PM.  Played some bangers that had all the little kiddies wiling with their glow sticks.  Then after about 30 the light guys flooded illuminated the stage.  Mr. Mau5 was not only not wearing his signature mouse head, but could be seen sniffling and tweaking in a way that spells doom.

Sure enough, minutes later the music stopped.  The house lights came on.  And someone got on the mic to tell the crowd the show could not go on because Deadmau5 was "too wasted."

Rumor has it Deadmau5 collapsed on Friday night while performing and had to be rushed to the hospital.  The reason cited for his collapse was "exhaustion."  Sounds like some Lindsay Lohan nonsense to us.  And we all know Lindsay Lohan's exhaustion stemmed from too much coke and not enough rest.

So, Mr. Mau5, we wish you a speedy recovery.  Take some vitamins for goodness sake, and get better soon!