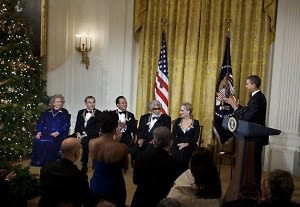 Esteemed as the nation's most prestigious awards, the Kennedy Center Honors laud those who have made significant contributions to American culture through the arts. This year's ceremony and gala brought together some of the country's most recognizable faces.

Caroline Kennedy served as Master of Ceremonies for the evening.