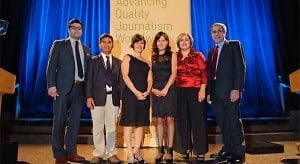 This past Tuesday, the International Center for Journalists brought together over 600 accomplished members of the media for its Annual Awards Dinner and Auction. The evening celebrated the notable contributions made by these individuals, who were honored for their practice of highest professional standards and their impact on society.

Christiane Amanpour of ABC received the Founders Award for Excellence in Journalism, recognizing her continuous commitment to high-caliber work.

Secretary Clinton addressed the crowd in a video, where she recognized award winners for "[helping to] shed light on issues that were once hidden in the shadows."

MSNBC's Joe Scarborough and Mika Brzezinski, co-hosts of "Morning Joe" served as the emcees for the evening. Ken Auletta, prominent media critic and columnist for the New Yorker, was the keynote speaker and delivered an inspiring speech on the subject of digital media.

The event, held at the Ronald Reagan Building and International Trade Center, featured a delicious gourmet dinner followed by a photo auction featuring shots by the lauded and legendary Eddie Adams.