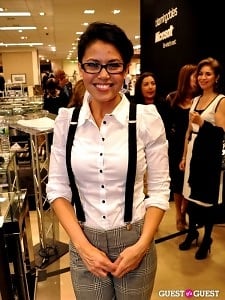 Geek 2 Chic was founded in 2010 and is produced by Microsoft in partnership with The Men's Store at Bloomingdale's Chevy Chase. During the show, "geeks" from large companies, nonprofit organizations, tech startups, and public service wear the latest fashions as they raise funds for the Network for Teaching Entrepreneurship. View last year's coverage HERE.

This Wednesday, Geek 2 Chic: DC takes the nation's capital by storm at Bloomingdale's Chevy Chase, with returning emcee Angie Goff of NBC Washington. All proceeds from ticket sales, plus 10% of Bloomingdale's sales the day of the event (save your duplicate receipts!), directly benefit NFTE.

Tickets to this October 24th event are limited...[BUY HERE!]

VIP: $85 (limit of 90) General Admission: $45. All guests will enjoy complimentary cocktails and hor d'oeuvres. Upgrade to VIP for premiere seating along the catwalk, eligibility for a Microsoft Store giveaway (previous gifts have included a Windows 7 phone and Joe Jonas concert tickets), and entry into the list-only afterparty from 9-11pm at DC hotspot The Brixton, co-sponsored by Startup DC.

Models this year include: