This past Sunday, as the World Cup games came to a finish, D.C. soccer fans made sure to celebrate the final game in style. Disco style, that is. Some D.C.ers watched from their usual bars, or from flat screens in their neighbor's house, but the true partiers in the District attended the 'Disco Soccer' party at the Beacon Hotel Rooftop for the last World Cup hurrah.

Organized by DCite Austin Hill, 'Disco Soccer' combined Hill's love of the classic disco record from an African artist named Biary with his passion for soccer to make for an unforgettable, all-day event. For those 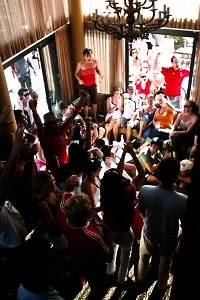 hoping to have a similar experience to the wild weekend when Soccer In The Circle brought projectors in and swamped Dupont, Disco Soccer provided them with an equally as exciting vibe on the tournament's final day. With six huge screens set up on the Beacon rooftop, the venue filled to capacity with rowdy soccer fans before anyone could even say vuvuzela.

Those who arrived early enough enjoyed free drinks and food specials based around the two competing countries. The disco aspect of the day came into play when NYC DJs Jacques Renault and Marcos Cabral arrived to spin for the game's after party. With music blasting, overzealous vuvuzela blowers, and Spain fanatics jumping in fountains, the Disco Soccer attendees continued dancing and celebrating into the night.

Now that the games and celebrations are over, we need a new sport to break out our disco gear and horns for! Strasburg Night Fever, anyone?