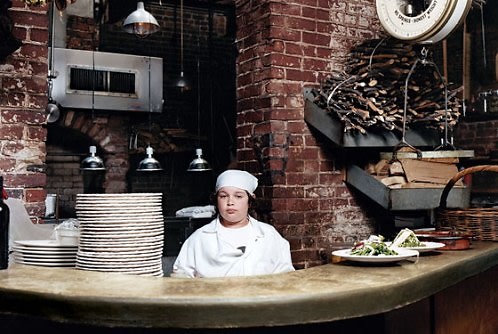 Ruff! Stanley here...so I wasn't going to post on this kid, but decided to anyway, so that world can see what giving unguarded freedom to a child will create (a monster).  In this week's New York Magazine, on newsstands today, there was an entire article devoted to Alex Goldberg...the "Mayor of Nolita", as his older sister calls him, that thinks he's hot shit.  This fatso has had "free reign" over the streets of nolita since before he can remember, establishing himself amongst shop owners, models, night club owners, rappers, actors, and athletes alike.  He's held jobs at Supreme on Lafayette, NikeID, and helped out at Peasant, DiPalo's, and Papabubble.  He's also only 14.  Many think he's like a man trapped in a child's body, but I'm not fooled.  I think he's just a shitty kid that doesn't want to listen to a single adult and that has idiot parents that like that their 14 year old can get them into Nobu.  This is one of the most pathetic profiles written by New York Magazine, so pathetic that you won't be able to stop reading it.

Alex goes to the James Taylor concert in the Hamptons this summer and is disinterested in who that even is, and would rather talk to an NBA player than Paul McCartney.  He makes fun of Dune, claiming that Bungalow 8 is much better anyway, and smokes fake fags on Lafayette.  Who the fuck does this kid think he is? First of all, me and my DAWGS have been running around Nolita much longer than this kid, who's claim-to-fame came after sneaking out to hang with wanna-be celebs at a party at the Delano in Miami last year.   His parents claim that they worry about him losing his childhood, yet they are so lenient with him that they fail to ground him for sneaking out.  No, instead they let him party with his newly made freinds (more than triple his age) for the rest of the vacation.  He calls them by their names (Rich and Robin) and frequently tells them to fuck off.  Sweet. Sounds like a gem to me.  If this child makes one dime off of my city or this magazine write up, I may have to take a bite out of his be-hind.  Until the day comes, I will be anticipating his "growing up"....because god knows this city is a tough bitch and chubby 14 year olds may be interesting to see hustling around town now, but in a couple years he will be a has-been with a coke addiction, a balding head, and 40 more pounds on his frame. Ruff!