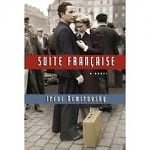 Suite Française is an unfinished work, but why it wasn't finished makes Irene Nemirovsky's words all the more powerful. Irene was a prominent French author during the 1930's, but she was also Jewish, and died in Auschwitz while writing Suite Francaise, itself a tale of France and its people under Nazi occupation.

There are multiple stories going on, involving French of disparate social and economic class, as well as regional identities, but what is remarkable in each is Nemirovsky's objectivity. The Germans are not portrayed as purely evil; some are often shown in an altogether sympathetic light, which makes for a an educative, albeit chilling reading. Nemirovsky intended there to be five books; instead we get two, but, despite a lack of polish, they stand on their own. At the end of the book, there are notes for the ensuing books as well as letters from Nemirovsky to her family, but they, like the end of The Diary of Anne Frank, are painful (though worthwhile) to read.