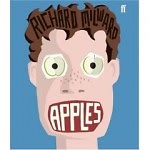 Some people think Clockwork Orange is a work of staggering genius. Some people find staggering genuis is a euphism for irritating and deliberately obtuse. If you, like I, are one of the latter, you may want to check out Apples, written by a 23 year old Brit named Richard Milward. Like Clockwork, Apples reads like a somewhat detatched observation of dystopian society, only Milward's setting is in a white ghetto in modern-day Middlesborough.

The narrators are the shy, reclusive Adam and the reckless, promiscuous Eve, both 15, and both dealing with troubled home lives (Adam has a violent, oppressive father and Eve a dying mother). Like its biblical forefather, Apples is a tale of temptation, and its effects; unlike Genesis, it isn't preachy, and while its subject is heavy, it's engrossing enough to be a perfect beach read.