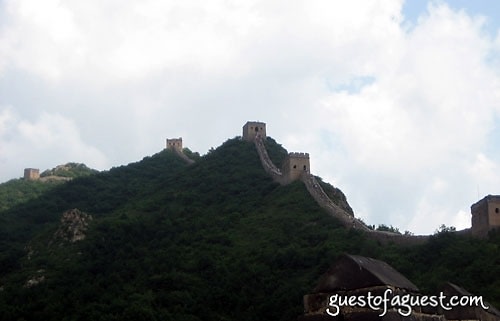 Luckily , the day opened with clear, bright skies for my trip to the Great Wall. To avoid the crowds at the Beijing sections of the Wall, we headed to the mountainous region north of the city, to the section of Wall at Simatai. Located about 75 miles from Beijing, Simatai is the section farthest from the city, and is one of the few to retain the original features of the Ming Dynasty. Running along the peaks of the Yanshan Mountains, it is also the highest section; the Wangjinglou Tower at the summit reaches a height of 3,281 feet, and on a clear night you can see the lights of Beijing. To build at such precarious heights, goats had to be used to haul up the bricks, one at a time.

There is a trail to walk to the top, but in the interests of time, we took the "cable car" to about halfway (when they say "cable car," they mean "swaying ski lift with cotter pins holding the doors closed"). A steep winding trail took us to the top of the Wall, about 2/3 along its 3-mile length. The steepest section, where the incline reaches 80 degrees and the pathway is barely two feet wide, was closed (but I would've done it, really). The other 2/3 is mostly downhill (though sometimes at angles approaching 60 degrees... on wet, mossy stone).

As the day cleared even more at this height, the views were spectacular. The wall is generally a bit narrower here than what you might have seen (the sections in Beijing) - no ten men across here. At times, we were no longer walking on the wall, we were walking next to it. As we came down the slope, we met more crowds, who had started the more gradual climb from the other end, and more t-shirt vendors (yes I did buy an "I

Climbed the Great Wall T-shirt. So sue me). This section is separated from the next by a valley - the walls come down to within 50 feet of the river at the bottom, connected by a suspension bridge about 4 feet wide. We decided to take another path down instead, which led me to the quickest way down after the hike - the "Flying Fox," a wire line that you hang from on a sling. The ride takes you over the reservoir at the foot of the mountains, to a short boat ride to the "base village." Scary at the top, but a lot of time saved over my more cautious companions, allowing me to enjoy a beer or two from the restaurant porch. An exhausting, but exhilarating day.