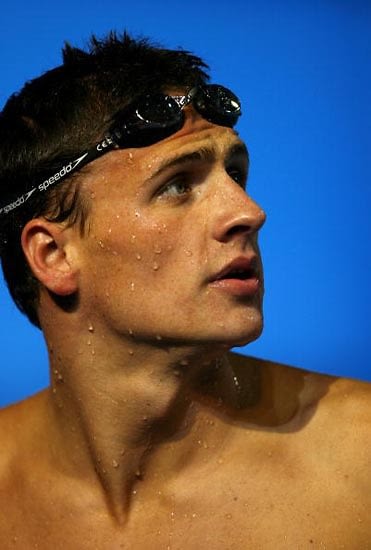 - He was born on August 3, 1984. - Born in Canandaigua, NY, but moved to Daytona Beach, FL so that his father could coach swimming. - Graduated from Spruce Creek High School in 2002. - Graduated from the University of Florida in 2007 with a degree in Sports Managment. - Has two sisters and two brothers. - Started taking swimming lessons at the age of 5 with his father, but did not get really serious about the sport until he was 14. - He has also played soccer, lacrosse, and basketball. - While training for the olympics, he swims 24 hours a week- about 70,000 meters. He also weight trains for 6 hours each week, and completes a 2 hour workout to improve his core strength. - He has sponsorship deals with Speedo, USA Swimming, Gatorade, Mutual of Omaha, Gillette, Procter & Gamble, Ralph Lauren, AT&T, and Nissan. - He is involved with several charities including the National Parkinson Foundation, the Mac Crutchfield Fund, and Parent Project Muscular Dystrophy. [Photo via]
1 of 8