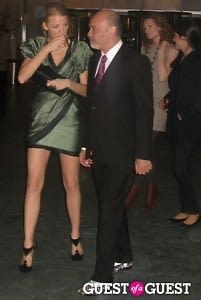 She strutted in late clinging to the designer and wearing mesh ankle booties. Lively, of course, pinned down her identity as a fashionista when riding around Paris on a Vespa with Louboutin this summer, as she revealed on "LIVE! With Regis & Kelly":

But why, besides the inevitable gains of this advertising plug, has she taken such pains to promote the brand?

It has been said that Louboutin claims it takes a woman like Lively to inspire him; what does she think about being a shoe muse?

And with those platitudinous remarks, she walked off with Robyn Lively, her sister known for roles on "Doogie Howser" and "Twin Peaks."