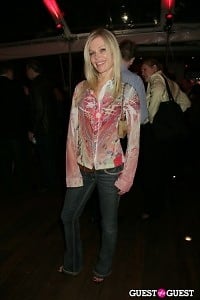 It has been brought to my attention that there is a show on Bravo called "Millionaire Matchmaker." The reality dating program is quite popular. Last night I went to a sports bar called Snap where millionairess Cindy Guyer had a party for the airing of her episode and dished to me on what she's learned in the game of love..._

Guyer (whose last name is all too appropriate for her dating pursuits) owns the bar Wine and Roses, and in her day, she was most prolific cover model for romance novels. Discovered by Wilhelmina in Greenwich, CT, Guyer started modeling in New York at age 14 and became known as the "female Fabio."

"I used to be like Nancy Drew," she said. "and then one day they put a corset on me, and it was like, 'Whoo,' no going back. I traded my flashlight for a corset."

Though her provenance would put her in prime position to find the fairytale love she embodied on book dust jackets, she revealed that her love life has been more problematic than not.

I'd usually leave it to someone like Slavoj Žižek to analyze what a show like this--built around the premise of artificially pairing a well-endowed person with an appropriate partner--says about our current reality, but because Guyer waxed glib (and her eyebrows), I think her own responses provide the telling problems built into the ploys of the show.

Guyer said she has been in three ten-year relationships, one of which was a marriage to a con-man. When she showed up in court to defend him and speak on his behalf, it turns out he arrived with his mistress. "I understand you were married to a fraud?" I said to her.

The bar was pretty noisy, but she is so attached to this idea of being the romantic fabulist of her own narrative, that she had this moment of an inverse-Freudian slip...an unintentional creative mishearing. Needless  to say, she favors the nickname Cinderella for Cindy.

So what brought her to "Millionaire Matchmaker"? In speaking with many of the other millionaires and millionairesses from this season who were at the bar last night (and who had formed a little club on Facebook), most people are motivated by the sheer rush of pseudo-celebrity. The millionaires view this as a great way to gain notoriety, and some admitted to entering as many castings as possible for these sorts of Bravo shows in hopes of increasing their odds for being selected.

It's certainly not for monetary gain. Not only are the millionaires not paid for their segments, which take three weeks to shoot, but they also have to pay for the elaborate dates they concoct. Most called  Bravo cheap and exploitative. But they satisfy that fame bug under the network's auspices.

Guyer seemed more, if only slightly, sincere than others about finding a guy on the show, but with her PR team egging her on to participate, it does seem more of a vending of goods (and soul) in this good old capitalist country. 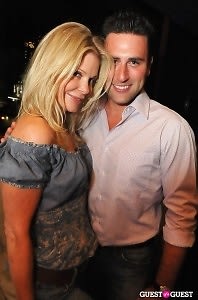 On the show she chose to as her master date Michael Wachs ("Wachs, like wax on, wax off," he said), a guy in his early 30s who owns Royale Security, a private security company that provides security services to high profile special events in the city. He's currently in negotiations to take over Cafe 50 West.

When I observed the two in the bar--though the episode claims they are well on their way to finding a happy ever-after--they did not seem all that chummy or romantic.

"I met a great friend and a great guy," Guyer said, dissipating any hint of romance there. "We're both so busy, so you never know." They've been on a few dates since the show--which in her description seemed like business lunches--and she curiously couldn't recall his last name. They've been talking about the possibility of opening a restaurant together. Guyer claims that she initially resisted her friends' insistence that she be on the show, because she feared the uber-yenta herself, Patti Stanger. "I said 'no' twice. I got afraid, I got scared," she said. "Patti's tough. I went through a nasty divorce, so I'm very sensitive." Ultimately, though, she won the ringleader's heart. "She liked me," Guyer said of Stanger. "I hope, I hope. But the trailer kinda looked like she liked me, like she really did want to help me. And she said she'd been through a lot of things that I'd been through."

That hardship, though, she indubitably used to fuel her quest to find romantic happiness.

"I was upset," she said. "I was hurt. But now, what doesn't kill you makes you stronger, and I'm such a better person because of it. And look out: I'm gonna do amazing things."

Love was not her sole motivation, and Guyer hinted at her craving for TV fame by broaching her past reality-show involvement.

"I did a couple spots for 'Housewives,'" she said. "And I was on the first episode with Ramona, and I pushed her in the pool. People would come up to me constantly and say, 'Oh, you're the girl in 'Housewives.' I have a feeling I'm going to be very popular, at least for a few weeks."

But her ambitions have grown deeper than just her fifteen minutes.

"I want my own show now: 'Cindy Land.' I did the romance novels. And I did this romantic bar."

And though she may not have found love in the past, she hasn't given up on the fairytale.

"Just because you have one bad frog, doesn't mean there are 50 bad frogs. Eventually one will turn into a prince," she said.

So who is her ideal guy? "I'll know him when I see him," she said. In the episode, she confessed an affection for Hugh Jackman. "I'm kind of spoiled. I work with all these gorgeous men at work. And I do like a good-looking guy who's smart, who takes care of himself, and the only thing I can say--I like tall men. I like dark-headed men, but I'm open to older, younger."

And what does she make of being accused of cougarism?

"When you see this show, you're going to be laughing," she said. "They kind of tricked me. So I guess, I'm gonna look like a cougar on the show." There's almost a fifteen-year age gap between Guyer and Wachs, though the exact number isn't known because Guyer continues to lie about her age (her Wikipedia entry says 41, she told me 45, and another source says 48). "That might have been a little bit of a turnoff why we haven't been involved romantically, at least not yet," she said of the age difference in her relationship with Wachs, which apparently has not been consummated.

She said she feels a ten-year age gap is the limit, but isn't the cougar all the rage?

"I don't care what's en vogue. I'm very old-fashioned," she said as she adjusted  her tight-fitting Maggie Norris number.  "I have my own certain style, and I always wear a corset." 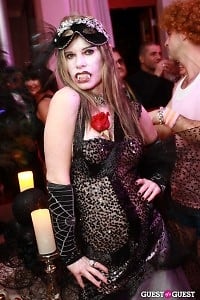 She couldn't go for a model though, just a regular guy. She said she invited her buddy Fabio to the bar last night and claimed he was actually going to fly in the event. That is, I assume, before plans presented themselves and logic flooded his brain.

I wondered why she never went for the male supermodel, and Guyer claimed Fabio and she fought too much to make a good couple. What do they squabble about? "The mirror," she said. "You've never heard that old philosophy: two models, one mirror."

As Wachs approached, I thought I'd cut right to the chase: "So there hasn't been anything romantic yet, I hear..." He got flustered and said, "Cindy. Cindy." He cleared his throat. "We have romantic times, all the time," he said. "We are taking it slow and will see what will happen." Guyer said in a measured tone. "Cindy is amazing," he said. "Mike is a amazing," she countered. "He's a knight in shining armor."

But does he have a problem with the cougar element? "The cougar!" he said. "She's so beautiful and so hot. I'm not used to being around beautiful women that talk to me. Cindy is so stunning. She's amazing. Shes beautiful. She's a smart business woman. We're talking about doing some ventures together in the future. And so it's amazing all around. I don't really see an age difference."

And with that we wish them true love!