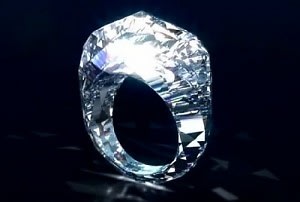 Shawish Jewelry has unveiled "The World's Fist All Diamond Ring." This 150 carat bad boy is carved from one single-faceted diamond and it will set you back $68 million.

At first this ring could come across as some type of publicity stunt, but Mohamed Shawesh, President and CEO of Geneva-based Shawish Jewelry, seems genuine and passionate about the reasons he wanted to create it.

"A ring made entirely of a faceted diamond has always seemed like a fantasy, It seemed impossible, so we decided to embark on the adventure of creating it. To create the perfect diamond ring is the epitome of art."

This ring was definitely a labor of love for the designer. In 2009 they sought to get a copyright on the design and in 2010 it was finally secured, but the ring was far from fruition. 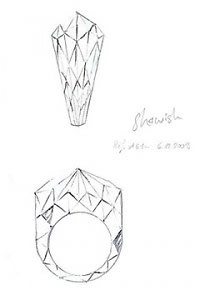 Shawish goes on to talk about the process they went through to get the ring as perfect as possible,

"we had to do multiple tests with the design, to get the precision of the circle right. Diamonds are made of carbon and molecules that can change, even the colour can be altered when attempting to cut it. We had to buy special laser equipment, to cut directly into the diamond. The most important aspect is preserving the integrity of the diamond and of course the most difficult phase is precision cutting an entire stone into a ring."

So now it's 2012, all of that hard work has paid off, and his fantasy has become a reality. At 150 carats this stunner dwarfs Kim Kardashians 22.2 carat ring and makes an 18 carat ring like Beyonce's look like chump change. In Hollywood everyone wants the biggest and the best, and when it comes to rings, this is it. That's why we can't wait to see which celebrity will be the first to rock it on the red carpet. Stay tuned...

To get a 360 degree look at this mega diamond check out this video which features it in 3D animation: