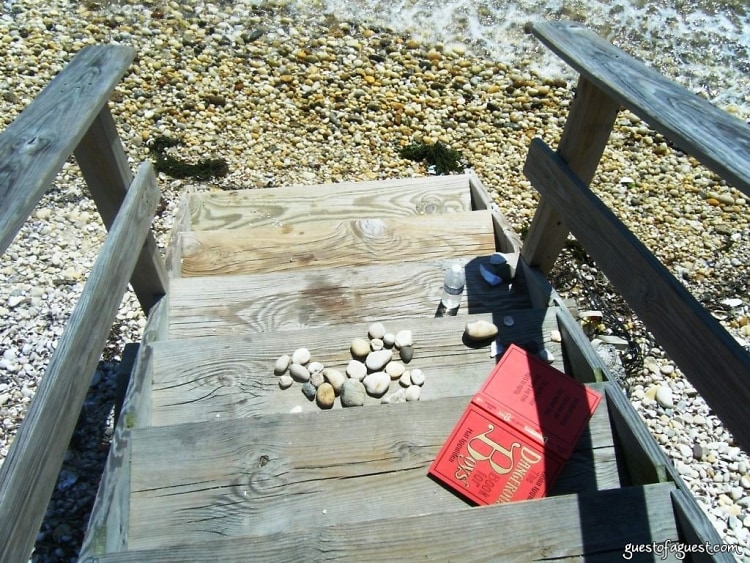 There is a magical little store in Quogue called Bev Cardo. It is the site of more useful knickknacks for yourself than you could ever imagine. Besides that, it is where I found this incredible hardback.  I bought it as a gift for my own "boy" to "recapture Sunday afternoons and long summer days". The Dangerous Book For Boys by two grown boys: Conn and Hal Iggulden is indeed the "perfect book for every boy between eight and eighty."   Because, "In this age of video games and cell phones, there must still be a place for knots, tree houses, and stories of incredible courage."

"Is it old-fashioned? Well, that depends.  Men and boys today are the same as they always were, and interested in the same things.  They may conquer different worlds when they grow up, but they'll still want these stories for themselves and for their sons....The camp you make today will be there forever.  You want to learn coin tricks and how to play poker because you never know when the skills will come in handy.  You want to be self-sufficient and find your way by the stars.  Perhaps for those who come after us, you want to reach them. Well, why not? Why not?'" [Cal and Hal Iggulden]

For knowledge on the stars, insects, go-carts, famous battles, stories of courage, and how to play chess well, along with so much more; this is a book that every boy in your life deserves.  My favorite part?  Advice on Girls which I felt the need to copy in its entirety below:

You may already have noticed that girls are quite different from you.  By this, we do not mean the physical differences, more the fact that they remain unimpressed by your mastery of a game involving wizards, or your understanding of Morse code.  Some will be impressed, of course, but as a general rule, girls do not get quite as excited by the use of urine as a secret ink as boys do.  We thought long and hard about what advice could possibly be suitable.  It is an inescapable fact that boys spend a great deal of their lives thinking and dreaming about girls, so the subject should be mentioned here-as delicately as possible.

It is important to listen. Human beings are often very self-centered and like to talk about themselves.  In addition, it's an easy subject if someone is nervous. It is good advice to listen closely- unless she has also been given this advice, in which case an uneasy silence could develop, like two owls sitting together.

Be careful with humor. It is very common for boys to try to impress girls with a string of jokes, each one more desperate than the last  One joke, perhaps, and then a long silence while she talks about herself...

When you are older, flowers really do work- women love them.  when you are young, however, there is a ghastly sense of being awkward rather than romantic- and she will guess your mother bought them.

Valentine's Day cards. Do not put your name on them.  The whole point is the excitement a girl feels, wondering who finds her attractive.  if it says "From Brian" on it, the magic isn't really there.  This is actually quite a nice thing to do to someone you don't think will get a card.  If you do this, it is even more important that you never say, "I sent you one because I thought you wouldn't' get any" Keep the cards simple.  You do not want one with fancy stuff of any kind.

Avoid being vulgar. Excitable bouts of wind breaking will not endear you to a girl, just to pick on example.

Play a sport of some kind. It doesn't matter what it is, as long as it replaces the corpse-like pallor of the computer programmer with a ruddy glow.  Honestly, this is more important than you know.

If you see a girl in need of help-unable to lift something, for example- do not taunt her.  Approach the object and greet her with a cheerful smile, while surreptitiously testing the weight of the object.  If you find you can lift it, go ahead.  If you can't, try sitting on it and engaging her in conversation.

Finally make sure you are well-scrubbed, your nails are clean and your hair is washed.  Remember that girls are as nervous around you as you are around them, if you can imagine such a thing.  They think and act rather differently to you , but without them, life would be one long football locker room.  Treat them with respect.