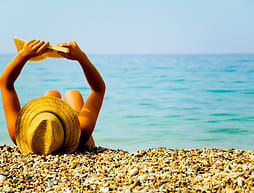 Most people think that the quintessential beach read consists of mindless prose and forgettable characters. We beg to differ. So, we've provided a list of both contemporary and classic must-reads that you can be proud to bring up at your next dinner party.

The Hamptons Must: Beach Road by James Patterson

Mix the Hamptons with some hot detectives and a little bit of murder, and you'll be glued to your beach chair. A summer or two ago, you couldn't pass someone on the beach who wasn't reading this, so if you missed out, it's time to hop on board.

The Magical Romance: Like Water For Chocolate by Laura Esquivel

If you love amazing food and star-crossed lovers, this easy-read will keep the pages turning. It's imaginative and a little surreal as it follows a family caught between tradition and lust, but all the while cooking up mouthwatering meals that frame their lives.

The NY Classic: The Great Gatsby by F. Scott Fitzgerald

We've all read it, and there's no better place than the Hamptons to read it again. Just go through the pages and head back in time to the lavish early 20th century (and there's no shame in picturing a young Robert Redford along the way).

The Heartwrenching Tragedy: The Road by Cormac McCarthy

If you've read one too many bubbly, unrealistic novels, this book will more-than-balance you back to reality. Set in a post-apocolypse U.S., a father and son travel through the burning, grey world to "the coast," whilst avoiding starvation, frostbite, and the now cannibalisitc human race. Your heart will break for the undying love that a father and son can share in this brief yet incredibly profound novel.

The Life Changer: The Alchemist by Paulo Coehlo

Follow Santiago through the desert as he looks for his own personal legend, and you might just find yours. Some readers say that you'll never be the same after this short but powerful read. Coehlo's writing is impeccable, spiritual and uplifting. By the last page, your soul will feel renewed.

Set smack-dab in the middle of NYC in the wild 70's, this book follows several characters through the days surrounding Philippe Petit's tightrope walk between the twin towers. McCann makes each character unbelievably unforgettable, and will blow you away with how their stories all connect.

The LOL: Are You There Vodka, It's Me Chelsea by Chelsea Handler

Follow comedienne Chelsea Handler as she reminisces on one-night stands, awkward encounters and her favorite blackouts. Ms. Handler's wit and candor make it impossible to put down this guilty-pleasure beach read.

The Family Epic: 100 Years Of Solitude by Gabriel Garcia Marquez

Marquez's masterpiece, following one family for a century of turmoil, war, and love, combines magic with the realistic portrayal of a fictional small town in Colombia. Considered his magnus opus, we consider this a book you need to read before you die.

The Dark American Mystery: The Maltese Falcon by Dashiell Hammett

If you're a fan of detective fiction, it's time to pick up the original! Detective Sam Spade is a rugged outsider who trolls the mean streets of California trying to repair a fallen city. Hammett's strong prose and blunt dialogue make it impossible to put down.

The Tear Jerker: The Book Thief by Marcus Zusak

Picture To Kill a Mockingbird set in Nazi Germany. The story follows a young orphan taken in by a German family opposed to Hitler's regime, and her impoverished yet fulfilling existence in a neighborhood just outside of Munich. Narrated by Death, make sure you have a pair of dark sunglasses by your side to hide your inevitable tears when the ending rolls around.

The Non-Fiction Exploration: The Lost City of Z by David Grann

In the 1920's Percy Harrison Fawcett set out into the Amazon Rainforest determined to find a rumored lost city in the middle of the jungle. He never returned. In present day, journalist David Grann sets out to uncover what happened to Fawcett, and perhaps discover for himself the mysterious city that led to his demise.