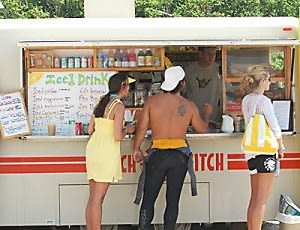 At an East Hampton Town Board meeting early last month, vendors bid on highly-coveted passes that will allow them to sell food at various Hamptons beaches and parks this summer, Curbed reports.

The contracts won by vendors will last for three years and costs between $10,000 and $27,6000, but this is only the second time that restaurant owners have had to enter the competitive bidding process.

Until last year, the town's designated vending spots were won on a first-come-first-serve basis, but with crowds increasing over the past few seasons, the town board instituted the bidding process in 2011.

So what kind of food can expect to snack on at the beach this summer? The Ditch Witch, Montaco, John Bogetti, Turf Lobster Roll, Craig's Ice Cream, Doreen's, Clam Bar and Jimmy Hewitt will be among the vendors, but with beach-goers expected in record numbers, brace yourself for extra long lines.