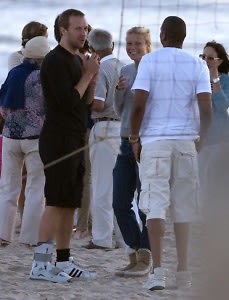 [Pictured left: Chris Martin, Gwenyth Paltrow, and Jay-Z at a Hamptons beach party] Gwenyth Paltrow and Chris Martin on the beach! Lance Bass ousted from Bridgehampton Polo! Alec Baldwin attending the usual array of events! Here's where the rich, fabulous, and famous were out and about the past week.

Photos have surfaced this morning of a beach party with both Chris Martin and Gwenyth Paltrow (together! in public!), as well as Jay-Z (without Beyonce! and hugging Gwenyth!) at Christy Turlington's beach party. All guests were relaxed and enjoyed red wine as the sun set, while kids (including Paltrow and Martin's daughter Apple and son Moses) collected sea shells along the shore. [Photos via] 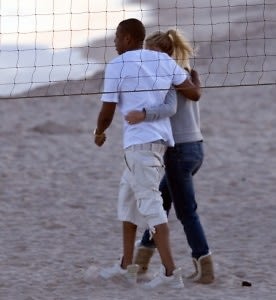 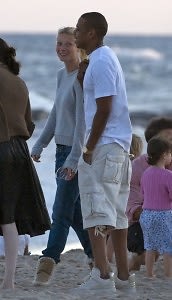 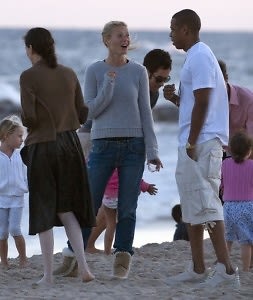 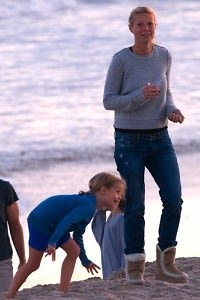 And in other news, here's where all the other celebs were hanging out...

Nick & Toni's was reeling in the celebs all of last week, with visits from Kelsey Grammer and Kayte Walsh on Monday, comedian Sandra Bernhard on Tuesday, SNL producer Lorne Michaels with Alec Baldwin and John Alexander on Thursday, Howard Stern and Beth Ostrosky on Saturday, and - whew! - L.A. Reid with wife and friends on Sunday.

Kelly Bensimon got BBQ takeout with her two daughters from down-home joint Turtle Crossing on Saturday night, drinking lemonade and trading silly bandz while waiting for their food to be ready. 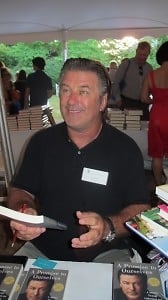 Alec Baldwin sipped cocktails and mingled with guests at the Guild Hall Gala on Friday evening, then hosted the East Hampton Author's Night on Saturday evening with famous authors such as Jay McInerney and Candace Bushnell in attendance, as well as Real Housewives of New York Jill Zarin and Alex McCord.

Lance Bass got into a bit of a scuffle at the Mercedes-Benz Polo Challenge at Blue Star Jets Field in Bridgehampton, tweeting that a woman came up to him and threw a drink at him, but he was "so confused why it just happened." Other stars hanging out in the Swagg Mobile Lounge included Khloe Kardashian (who seems to have spent the ENTIRE time posing for photos with horses, fans, and...the ladies room?), Stephanie Marsh, Bobby Flay, and Robin Quivers.

TI and Brandon Davis partied at AXE Lounge on Friday night, and Oneal Mcknight gave a special performance at the venue on Saturday.

Just down the road, Alexandra Richards and Nick Cohen in their first performance together in quite some time, spun for a completely packed house at RdV East, followed by resident DJs The Chainsmokers.

Lance Bass, after the Polo debacle, dined at Georgica Restaurant and Lounge on Saturday night, as did Russell Simmons. 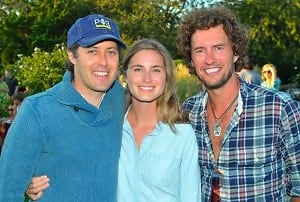