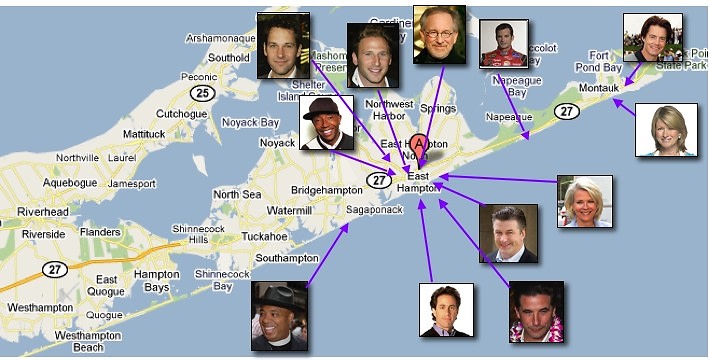 It's no surprise that many famous faces flock to the Hamptons on sunny summer weekends.  So where were some of our favorite celebs this weekend?

East Hampton drew in the regular Hamptons celebs, from the Baldwins to the Spielbergs, for their many dining destinations, while others trekked out to Montauk for the Hamptons Magazine Annual Clambake.  Here's a breakdown of who went where this weekend.

On Thursday, Billy Baldwin picked up pizza to go at Serafina East Hampton, chatting and posing for photos with fans by the bar.

Comedian Jerry Seinfeld was also seen picking up pizza at Serafina the following day, joking around with staff while he waited for his order.

Actor Paul Rudd, among many other famous faces, attended the East Hampton premiere of his new movie, Dinner for Schmucks, reportedly being quite the wallflower at the after party.