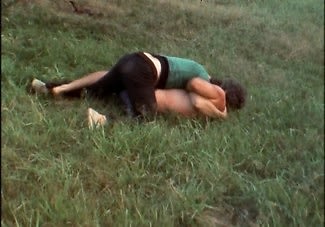 After spending some time in the Hamptons, be it seaside on a sunny day or shored up on a rainy afternoon, its idyllic ambiance always seems to invoke artistic inspiration.  Perhaps it prompts you to dig out an old, partially-painted canvas from the basement or take to your porch and pen the first pages of your should-have-been-written-years-ago novel.

[Photo: Not your typical East Hampton afternoon via]

Or, if you’re like Norman Mailer, perhaps you decide to produce a feature-length film.  In the summer of 1968, the acclaimed writer, actor, and political candidate directed and starred in Maidstone, an experimental film that has, until recently, been in limited circulation and little-known, excepting an infamous final scene.  Now, over 40 years after its 1971 release, The Criterion Collection has re-released the film along with Mailer’s Wild 90 and Beyond the Law as part of its “Eclipse" series.

Filmed on a number of East Hampton estates over the course of five days, Mailer’s work features an eclectic cast of characters, including professional actors, off-the-street extras, and - as Slate termed it - an “ad hoc repertory company” of the likes of champion boxer José Torres and editor Bernard “Buzz” Farbar.  In the film, Mailer plays Norman T. Kingsley, an acclaimed movie director running for president - and a target for assassination.  Actor Rip Torn co-stars in the movie as Kingsley’s brother-in-law.

The experimental film walks a fine line between reel reality and fictional footage.  Mailer’s role, for instance, echoes his own artistic and political ambitions: a novelist, journalist, and playwright, Mailer took to both the cinematic scene and the political stage in the 1960s.  His desire to redefine the relationship between art and reality becomes most apparent in the film’s final scene, in which his desire to have his character assassinated turns perilous. 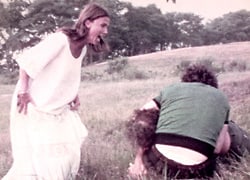 The scene offers viewers an unscripted encounter between Mailer and Torn, as caught on camera by filmmaker D.A. Pennebaker.  Set in an East Hampton field of overgrown grass, Torn - unsatisfied with Mailer’s work on the film - strikes Mailer with a hammer, inciting an all-out brawl between the two actors.

In the ensuing minutes, both men tumble in the field, exchanging heated dialogue while locked in each other’s grasp.  Breaking the fourth wall, Mailer addresses Pennebaker for help and manages to bite off a piece of Torn’s ear before his fourth (soon-to-be ex-) wife ultimately intervenes.

The encounter, set amidst a chorus of Mailer’s children’s cries and chirping birds, is unsettling, and yet it speaks to our continuing fascination with the relationship between performance and reality.  As Pennebaker follows the unfolding drama with his camera lens, at once both an active observer and an indirect participant, it is hard not to draw a link to modern day reality shows, in which cameramen capture “scripted” reality and real people play exaggerated versions of themselves on screen.

While Maidstone may deviate from your traditional “summer flick,” this true Hampton classic is worth a watch before this summer reaches its own scenic conclusion.