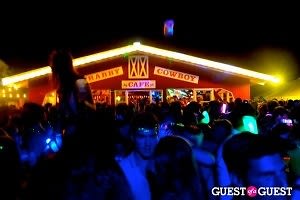 Ben Watts highly anticipated party of the weekend almost also ended up being the biggest party of the weekend. But it turned out to be just too big to handle. Estimates of around 3,000 attendees, plus those poor individuals that were still waiting in line, were at Rick's Cowboy Café at the time the cops called it a night for Shark Attack Sounds. Just because the party ended at 11:30 didn't mean it wasn't a good time. Hosts Ben Pundole, Mazdack Rassi, and Ben Watts showed Montauk how to seriously party, and told us watch this space for a Halloween rager! #shhhh

Click through for the lowdown on the party and a round up of the best Instagrams from Shark Attack Sounds!