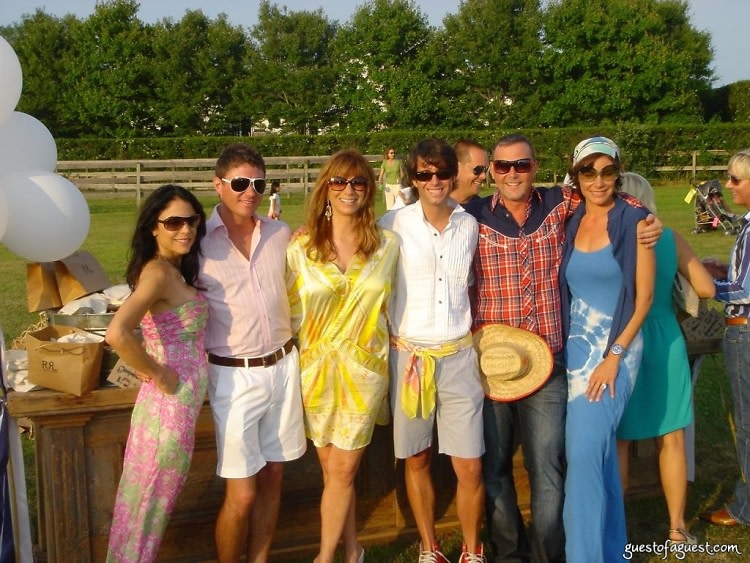 [Nick Dietz and Douglas Marshall with Real Housewives of NYC]

While the gay Boys of Fire Island generally kick off every weekend evening with ‘Low Tea’ and then ‘High Tea’, the Boys of the Hamptons don’t have as many options – and a lot less tea parties. We only get Almond on Friday night and if we are lucky, we can hit up a spot of Karoke at Almondcello on Saturday night. To say the gay nightlife options in the Hamptons are a bit limiting is an understatement. (And no, the gay beaches in East and South don’t count).

So when the Empire State Pride Agenda rolled into town this past weekend to throw their 16th Annual Hamptons Tea Dance at the festive Diamond Ranch, every single gay and lesbian showed as well as a lot of their supporters. Hello, where have all of you been hiding? It got me to thinking: gays in the Hamptons are like roaches, they only come out at night.

But in this case, it was for the Tea Dance. I was so excited to see that there were about 1,200 people in attendance: Lesbians and Gays and their friends, fans and supporters. I seriously have never seen this many gay people in the Hamptons and I wish I saw them more often. According to the ESPA,

“The most anticipated lesbian, gay, bisexual and transgender (LGBT) rights event of the crowded summer season, the Hamptons Tea Dance draws an impressive cross-section of leaders from the worlds of business, finance, law, philanthropy, politics, fashion, art and design.”

Of the notable supporters, our favorite ladies from The Real Housewives of New York were there getting down, mingling, posing for pictures and OF COURSE filming Season Two of RHONY. We mixed with the fabulous Jill Zarin, Countess LuAnn de Lesseps and Bethenny Frankel – and I FINALLY got to meet Jill’s Gay Husband Brad Boles. Loved him ~ seriously, the verbal play by play between him and Jill is a traveling comedy act.

We dined on wieners (okay, hot dogs) and watermelon while dancing to the tunes of DJ/DIVA drag queen, Lady Bunny. Seriously, it would not be a Tea Dance without Lady Bunny and not many others could get THIS MANY people up and dancing at 6pm. Known for being a TOTAL DIVA, Miss Bunny did not disappoint. When Bravo TV asked if she would sign a release to appear on an episode of The Real Housewives of Manhattan, Lady simply said, “I don’t have time for Bravo”. I love how she was not phased by Bravo’s interest in her! Meanwhile, I had a pen in pocket to sign a release if asked.

As I trotted, weaved and cruised my way through the crowd I noticed that the style at this party was amazing! You had classic Hamptons over the top preppy mixed with a few gents that took their look back to the good old days of the Roxy: Tank Tops, unbuttoned shirts withchest hair blowing in the breeze and for some, no shirt at all. The one thing EVERYONE seemed to be wearing besides designer shades was a smile. People seriously had fun for this great cause, making me wish we gathered in ways like this more often.