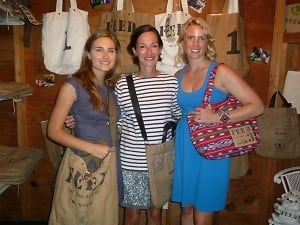 What better excuse to shop, drink, and dance than for charity's sake?  Well, last Saturday all three were in full swing at the Cynthia Rowley pop-up in Montauk, where the designer herself and Lauren Bush celebrated the launch of FEED Projects new temporary shop.

FEED Projects' mission is to create good products that FEED the world. Their products raise much-needed funds for the UN World Food Programme's School Feeding operations and in doing so create awareness of the worldwide problem of child hunger.  FEED was co-founded by Lauren Bush and Ellen Gustafson (pictured above) in 2007, and has provided over 55 million school meals to children around the world.

While sipping IL Prosecco out of straws and chatting with the ever-friendly staff, guests could peruse the FEED collection in the back room, as well as the Cynthia Rowley collection in the front.  Notable items included tees silk-screened with "Memory Motel" and the tag line "Save Gas, Shop Montauk," as well as a vast collection of funky (and many one-of-a-kind) sunglasses.  Naturally, a big hit with the GofG girls.

Oh, and of course, the infamous wetsuits.. 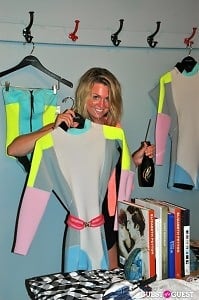 After the shopping subsided, guests headed next door to the infamous Memory Motel for dancing and more drinking to the sounds of The Rassle.