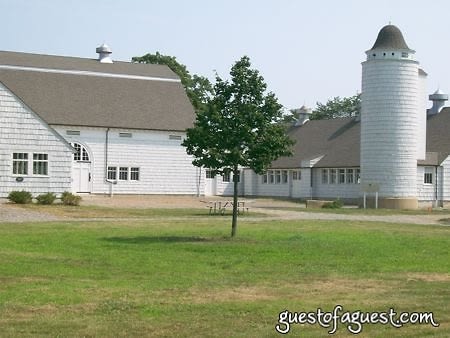 Up through this past Sunday, the only thing I associated Marshall Fields with was a somewhat frumpy, cut-rate Sundance-styled catalogue that every so often made it past our post office discard bin. Now, after visiting Caumsett, his former country estate that is now a state park, I can add gentleman farmer, huntsman, and anglophile to the reference catalogue.

Field had Caumsett built as a retreat where he could indulge in wife-free activities, but it's no modest country cabin. Rather, the property was constructed to be entirely self sufficient, replete with its own electricity and water supply, gardens, wildstock, and dairy. Fields was also an avid sports enthusiast, and Caumsett offers stables,  jogging, cross-country skiing, and cycling paths, and a beach from which one can swim and scuba dive.

While the house is kind of blandly grandiose -a pile of bricks that's massive without being distinctive, the grounds and outbuildings are lovely. The walk from parking lot to mansion is 1.5 miles, and winds by walled gardens, the clapboarded dairy, a charming stone winter cottage, enormous stables, and an almost equally enormous carriage house before reaching its final destination. The mansion overlooks Lloyd Harbor and beyond -really that view alone is well worth your mile and a half. Caumsett is not open to the public, but there are enough easily peek-in-able windows for you to get the gist of the interior.