The ONE Thursday I miss a taping of "The Juice" is when they decide to, not only film at my favorite place ever (The Surf Lodge), but get all the ACTION on the crazy Montauk creature that everyone has been talking about all week. Nick Leighton sat down with the girls that found the creature (Rachel Goldberg, Jenna Hewitt, and Courtney Fruin...who are, no doubt having the most exciting months of their lives) to get the facts.

Here are the Facts on the Montauk Monster:

(They claim) it really was found on the shores of Montauk and carried to a friend's backyard where it has since decomposed (ewww!)

The bones have since been placed in a box in said freinds house where they will remain until said finders determine who will pay them the most the best recipients will be.

It is not a raccoon...the body proportions are off.

It is not a turtle...turtles have no teeth.

Dan and the rest of the Plum TV crew didn't get to share in a round of mojitos with me as they have been feverishly working on getting this video up and the web isn't their current strong suite (love you guys).

I am still up working in NYC, read: NOT by a beach out east.

Next week we will be taping "The Juice" on the Jitney and it has become official that I have the worst luck ever.

Go HERE to vote on what you think the Montauk Monster really is. 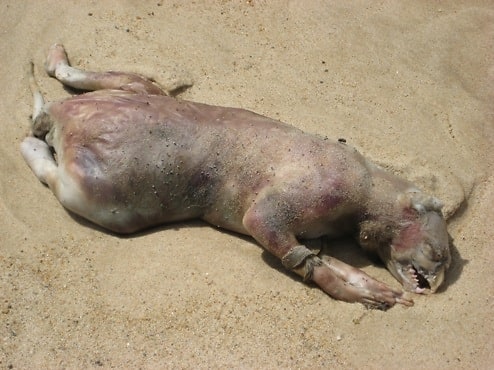