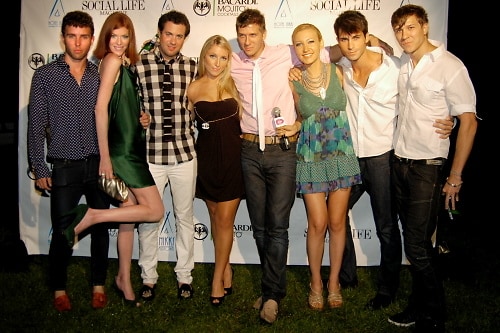 Devorah Rose's pet project (and we're not talking about her poodle, Princess Buttercup), a reality TV series that documents the lives of Manhattan's bold-faced socials IS happening and currently in production. Remember the pitch? (half of Manhattan's 20-something scenesters received it): "Like the Hills..but in Manhattan and a little older, and more mature." Rather than the initial buzz of a series called 10021 that we all read about in Page Six Magazine months ago, the new and improved show is called Social Heights. Seems much more fitting, wouldn't you say?

A source from Saturday's Social Life Magazine Party dishes that Stick Figure Productions made several additions to the original cast members. The key players of Social Heights include Devorah, Teddy John (Devorah's on and off "boyfriend"), Kristian Laliberte, Annabel Vartanian, Brianna Swanson (Devorah's latest bff), Kerry Cassidy, Timo Weiland and a pair of twins (neither of these, though).

While the Real Housewives of NYC brought along a full crew and 6 or so cameras to film the glamorous Hamptons party circuit, Social Heights' was captured modestly by a solo cameraman. Tipsters dish that the stars began bickering at the step-and-repeat. Devorah Rose and Kristian Laliberte took charge over the "photo shoot," turning into a squabble over who was going to be photographed with who, who was standing next to who, how many pictures of each of them would be taken, amongst other antics. Of course, they know which side is their good side, but are we mistaken or is that not the director's job? Even the usual camera-friendly Mr. Laliberte was overheard sniping, "If they make us take one more picture, I'm going to kill someone."

Another source was allegedly interviewed and told the show was going to be on Bravo and described as "the man-about-town at ALL the hot parties. It gets better". Another guest overheard the soon-to-be reality stars dueling over the mock-fights they were staging. They're already pretending to be people they're not before they're fed their story lines. Tell me if I'm wrong, but doesn't that defeat the purpose of a "reality" show?

Tip of the hat to Devorah Rose for her tenacity and getting the show rolling. She better be getting well-deserved credit as a co-producer. We can't wait to get more dish on the characters of Social Heights!!! And how do we get our 15 minutes of fame?

[Finishing Summer With A Social Life]