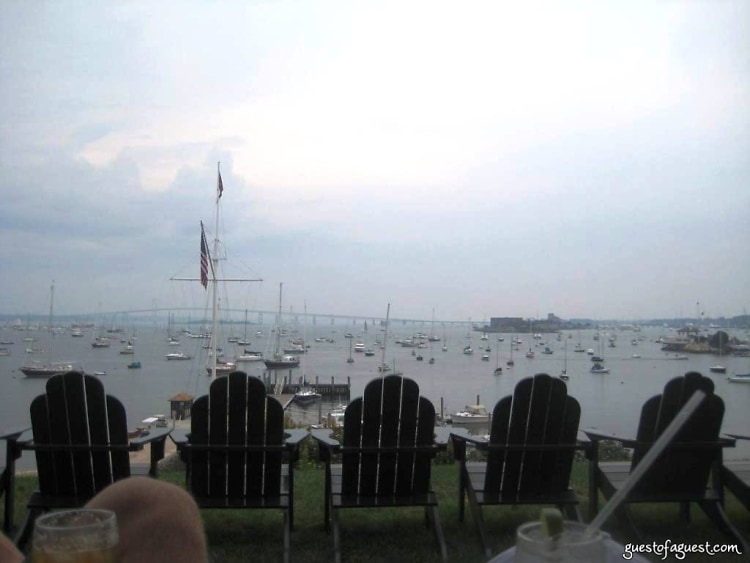 [Drinking Dark and Stormys at the Yacht Club]

I took a well needed breakcation from the Hamptons this weekend to catch up with the Sailors of Newport, R.I.  Here is a taste of what I learned:

Top 10 things I learned in Newport, R.I. this weekend:

10. The Folk Festival is quite the party. You missed it already but the Jazz Festival you can still catch, which I hear is equally as fun.  Just take it from me...you're better off watching from afar.

9. I hear there is a "boom boom room" downstairs at the Clark Cooke House that is apparently quite a scene.

8. The New York Yacht Club has the perfect hill for sliding down at fast speeds...

5. Newport is home to the REAL Bellevue, the template for many copy cat names, and the place to be to feel Gatsby-ian. Many noteables have held residences in Newport including the Vanderbilts, Eisenhowers, Astors, and, my favorite; Paul Gordon of the Goo Goo dolls

4. There's First Beach, Second Beach, and Rejects Beach. First beach can tend to smell like rotten seaweed and "rejects beach" (so called by the locals) is not really for rejects at all.  It has been called "Newports greatest secret" and wants to stay that way (whoops sorry).

3.The Black Pearl has the best clam chowder, the hottest servers, and a chef that rides a motorcycle around town. Castle Hill Inn is a great place to get veal. And bass. And foi gras. And scallops. And souffle. And wine.  It's also good for watching the sunset.

2. Not only did John F. Kennedy marry Jacqueline Onassis at St. Mary's in Newport, but his bride was responsible for designing one of the many beautiful lighthouses on the shoreline.