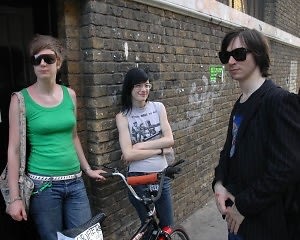 [Picture via Adicious] Apparently, there are many more ways to be politically incorrect than I thought nowadays. Without even knowing it, I have been committing a cardinal sin it seems, and no one informed me until just a couple weeks ago when I was in Montauk. Apparently, I've had my definition of the word "hipster" entirely wrong. Considering I live downtown in NYC, I thought I had the whole scenester thing figured out, but I guess I was way off-based. I was confronted by a group of readers who were not so happy with me over this at Sole East last month who said they didn't appreciate my liberal use of the word "hipster" in reference to certain places, clothing choices, and things of the like. It seems in Montauk, which I once referred to as a "hipster haven", this tends to happen a lot. And certain people aren't happy about it. So I thought I would do a little digging and defining before I opened my big mouth one more time and got myself banned from Sole East - or the Steven Alan store on Newton Lane.

A "hipster" (as defined by dictionary.com):

hip·ster (h?p'st?r) n. Slang One who is exceptionally aware of or interested in the latest trends and tastes, especially a devotee of modern jazz.

1. a person who is hip. 2. hepcat. 3. a person, esp. during the 1950s, characterized by a particularly strong sense of alienation from most established social activities and relationships.

Now personally, I'm not quite sure how it is insulting to be called a term that means you are "exceptionally aware of or interested in the latest trends". But I might be a little offended if someone said I have a "strong sense of alienation from most established social activities and relationships" i.e. a freak. I always kinda just thought it meant someone who spent a lot of money to dress like a homeless person and always had better music on their iPOD than me. I kid (kinda).

In reality though, apparently the hipster pure breed is few and far between (or maybe it's just those who want to admit they are hipsters are dying out?). So what makes a hipster? Because summer time flannel and wayfarers aren't enough to play the label game anymore. And Webster's Dictionary isn't helping me out. I thought Montauk was a straight shot to Hipster-ville but apparently I was WRONG. So... help? Otherwise I'm breaking out the term hepcat from now on (thanks, thesaurus.com), and that's just awkward.