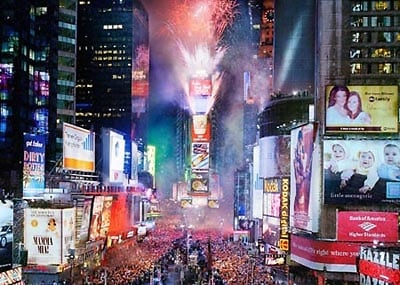 It's a fact: New York City and New Year's Eve seem to go hand in hand.  At least for people that don't live here.  Another fact is that a large majority of New Yorkers opt to peace out, choosing to ring in their New Year in a more fabulous location (Miami, St. Barths, Bahamas, Aspen, etc)...God knows Manhattan will be here, with considerably less tourists, on their return.  NY1 reports today that their poll numbers reveal what we already could have assumed.  Of the New Yorker's actually staying here for New Years, 80% of you will choose to stay home (and out of the 20% that go somewhere only 2% will take part of the festivities in Times' Square).  This, once again, confirms to us that New Yorkers are the smartest people around.  For everyone else out there, you have a shitload of options to choose from.  Our inbox has been packed since November with invites from everyone from the Strategic Group to the Bloc Group, to some guy named David Shapiro throwing a party on a boat.  Jesus Christ, do people like to promote!   It's sensory overload and we fear that it is often times wasted on the very people that wouldn't be caught dead in a NYC club on NYE, let alone ringing it in next to Ryan Seacrest at TenJune, or Johnny Drama (Kevin Dillon) at some place called Spotlight.  (How much do you think these people are getting paid to make THESE gigs worthwhile ones? ...we're guessing not enough).  Just for fun, we will present you with just a small percentage of the thousands of option that await you and your $130-all-you-can-drink-platinum VIP ticket:

-Join the Euros at Pink Elephant at their usual 27th street location, as well as at the Tom Beach Hotel's La Plage in St. Barths.

-Join Ryan Seacrest and hundreds of wanna be idols at TenJune.

-There's always the chance of getting fondled at Cipriani's.

-Kid Rock will be shitfaced for sure at the Hotel Gansevoort.

-1Oak is already irrelevant, but New Years may be the perfect time to check out their new gold wall, it's One of A Kind we hear.

-The underaged Richie Rich's will be will be popping bottles (as well as collars) at good old Bar Mart's.

-Upstairs, the "secret club where Leo gets in fights" is no longer a secret as the fights will be now started by followers of the blocgroup.

-There will be parties at Tavern on the Green, Amalia, Stereo, and even the "club formally known as Crobar"....The Grand, Azza, every club in Chelsea and 27th street, and of course all over Miami (if we get ONE MORE email about the event at the Raleigh Hotel in Miami Beach we may never be able to hear about Samantha Rosen again without throwing up!).  So in case you are interested in how much money you will be saving tonight, here's a sampling of the invites: