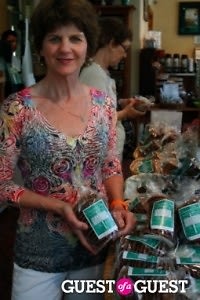 My first Tate's cookie experience happened at home. My dad had just come back from the grocery store, where he was sent to probably just buy things we actually needed like bread or milk or something along those lines, and he of course came back with 8 million other bags, full of tempting, fattening items we didn't need, including a bag of Tate's chocolate chip cookies. It's safe to say I have now chronicled my life before and after my first Tate's cookie, so when I discovered there was a Tate's retail store I knew I needed to meet the brains behind the cookie operation: Kathleen King.

On my way to the shop on North Sea Road, I imagined me and Kathleen King becoming best friends, munching on cookies together on a regular basis, her offering to adopt me, etc. Needless to say I had high expectations for this interview and even with the stakes held as high as they were, my first visit to Tate's Bake shop experience was just as satisfying as my first bite into their cookies.

The cute, little mint green bake shop draws you in because it just looks so inviting. As you walk past the people sitting outside enjoying their coffee (which I highly recommend) you walk into the one and only Tate's retail store. But it doesn't feel like a bakery, it feels like home. You feel like you just walked into your living room, except your living room is filled with cookies and pies and coffee, which makes it that much better. It makes you feel comfortable, like you've been there a million times, even if it was only your first. But this location was not the only one Tate's had ever occupied.

Me and Kathleen King chattin' it up

When Kathleen King was 22 she had just graduated college but had no job lined up. Back home in Southampton, there was a bakery available for rent, and seeing that she knew how to bake (and bake very well) she decided to give it a shot. King has now been running Tate's for three decades. The store had to move from its initial location, which is only a couple blocks away from its current spot, due to the need for more space. And even though Tate's current location is larger than than it's initial digs, how do they ship all those cookies all over the country from that tiny little shop? Well, they don't. King also has a 40,000 square foot bakery that takes care of that. That's a lot of cookies. 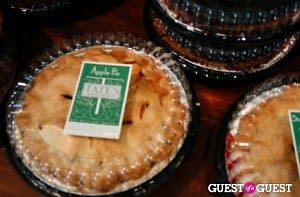 But once the interview really started going and I had already fallen in love with the bake shop and its products, I got to know a few more things about Kathleen King herself, such as cookies being her favorite thing to eat. More specifically, chocolate chip cookies, which totally makes sense because those are also my favorite and we have plans to be best friends, remember? Well, I have plans to be her best friend anyway. King also told me that although she does still love cookies after all these years, she does actually eat real food.

"My standard breakfast is a hard boiled egg with avocado on a brown rice cake or oatmeal because I try to eat very healthy. I have to balance the cookie addiction!"

King is not only a master of desserts, but she is also an entertainer and often hosts and attends dinner parties.

"I love to cook and my approach to cooking is the same as it is to baking: keeping it simple and pure."

Tate's bake shop produces so many great items, including cookies, pies, squares, coffee cakes, crumb cakes, and tea loaves, but I wanted to know what she likes to make at home, outside of work, for herself. Her answer? Pies! "For me theres nothing like a warm pie coming out of the oven." Amen, sista.

I asked King about some of her favorite customers that have come in, considering Southampton attracts so many celebrities. But as far as recognizing celebrities herself, she doesn't. "I never really know 'who's who,' so as far as celebrities and things, I'm not really sure." She remembers that one time her staff thought Johnny Depp came into the shop; "That would make my heart skip a beat." Us too Kathleen, us too. But refreshingly, King doesn't feed into the celebrity craze that most people in the Hamptons do. Her employee policy regarding the rich and the famous is as follows:

"I always tell my staff, if you recognize anyone that comes in, they are the same as everybody else. Everyone here is treated the same. I'm assuming they would want to be treated like that because they never get a break! I think to myself, how could you be so famous you can't even go out and buy a bag of cookies? How draining that must be!"

Well you're always a celebrity in my eyes, Kathleen!