A wealth of great restaurants, bars and “hang out" spots, it’s hard to not have a good time in Montauk. But there are few places that stand out amongst the many, and Navy Beach is definitely one of them. As if the location wasn’t impressive enough, the food is worth writing home about, so when I met with owners Frank and Kristina Davis, I quickly began to search for a #1 foam finger to wave wildly in their honor.

Frank and Kristina are long time East End vacationers and have “always been drawn to Montauk, whether it be driving out for the day or coming out going fishing, bringing the boat out,” says Frank. His wife Kristina describes themselves as,

“Those kind of New Yorkers, that even on the weekends in the winter come out and spend all of our holidays out here. We love it. It makes New York bearable.”

Although opening a restaurant wasn’t exactly their plan, opportunity knocked on their door and they couldn’t say no. Says Kristina,

“My husband always wanted to do a restaurant and I have a fashion and design background and I always wanted to do something not for the food part, but for the concept part. We met [our partners] a few years ago and became really good friends with them. We were always saying if anything ever comes up that’s really special we would love to do something and ironically two weeks later, Frank found this opportunity. It was really weird.” 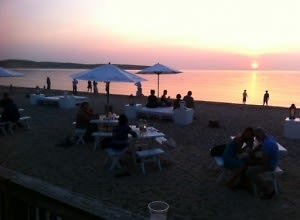 But Frank and Kristina knew what they were getting themselves into when they decided to open a business in Montauk and really made the effort to familiarize themselves with the community. “We really wanted to embrace the community, make them enjoy it too. It’s their home, we want them to not feel like [we’re] some city outsiders coming in to invade their space.” Surprisingly, it was Frank, Kristina and their partners who did a lot of the dirty work to transform the “dive pit” into what it is today. “We literally got here in the winter, we came and put them, [our two younger daughters], at the table in the middle of the restaurant, gave them some monopoly games, and we set off to work.”  The community recognized the effort, and, Kristina said, “It completely dispelled that notion of ‘these people coming in and invading us.’” Frank added, “We did it one, because we wanted to and two, because we wanted them to see that we were doing it [ourselves]. And when we needed help, we always hired local people.” 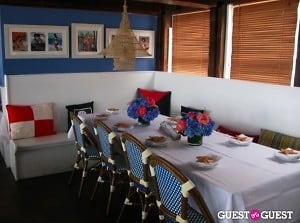 With the mention of hiring locally, I asked the couple how they are able to balance the personalities of both locals and vacationers and keep everyone happy. Frank explains,

“That was always a big question when we came in. We’ve been living out here for many years now and we’ve always been drawn to Montauk…so we sort of met people who lived out here and became very comfortable with them and sort of attracted to their strong feelings for the community which really makes it what it is. I think the balance comes in an open acceptance between us. And the people who live out here specifically are somewhat dependent on the people who come out because the service industry, whether it be commercial fishing or restaurants, beaches, motels, are largely dependent on the people that come out, for an income. So it’s a healthy co-existence if you will, but you got to be respectful of them when you’re a business owner here. We employ several dozen local people who live here, so not only are we feeling part of the community ourselves but we are employers of the community.”

Along with making sure the community didn’t feel threatened by their presence, Frank and Kristina wanted to make Navy Beach a place where families were welcome in an atmosphere that was still adult-appropriate.

"You can also bring your kids and still have a cocktail, and say ‘get out of my hair and go play, go skip some rocks’ because that’s important. You don’t always wanna have your kids at home with the sitter. You wanna go out and enjoy it as a family and still have an adult conversation while your kids are having a good time without hearing ‘what time are we leaving?’ and going ‘here’s your DS’ or something, you know? That was paramount to us.”

But Navy Beach is much more than a family friendly restaurant. It has taken after the general atmosphere in Montauk, which is a coexistence of all walks of life, from families, to hipsters, to seniors, to surfers, from both blue collar and white collar, and everything in between.

“Our target was young families and people being able to bring in their grandparents with their walkers and every age to enjoy it. What we didn’t anticipate was having a total, cool hipster sitting next to a family, and everyone being okay with it. But they are, and it’s such a mix of every vibe going on in Montauk.”

But of course, no matter how amazing Navy Beach may be, everyone needs to escape. Some of Frank and Kristina’s favorite Montauk spots include, The Crow's Nest, 668 Gig Shack, John’s Pancakes, John’s Drive-In, The Hideaway, and Ditch Plains “for a good beach day.” And if you want their menu recommendations, the buttermilk fried chicken, crispy shishito peppers and navy burger are must-haves. The marganegra is Kristina’s favorite cocktail and Frank encourages visitors to explore their beer selection.

And finally, I had to ask, if you weren’t in Montauk, where would you summer? Kristina’s response? “I think I'd still be coming [to Montauk]. I’ve fallen in love with it” What’s not to love?