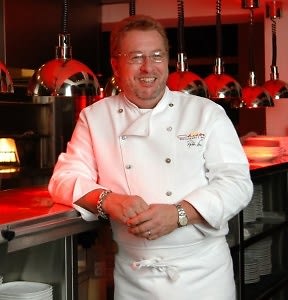 Robbin Haas may be new to Montauk, but he's certainly no rookie when it comes to the kitchen.  With a simple yet well-executed attitude toward Hamptons dining, he's serving up lots of local and seafood at the Montauk Yacht Club this summer.

Chef Haas is a man of few words.  When asked for ideas on what our poor domestically challenged souls at the GofG house could cook to look more impressive, he simply demanded:

"Get out of the kitchen and fire up the grill, it's summertime!"

While that sounds...dangerous...we have to admit we like his style.  A new addition to the Montauk Yacht Club this summer, Haas has been in the restaurant business for "too long."  Before relocating to the tip of the isle, he was consulting on three projects in Miami, Provincetown, and Antigua, Guatemala; he opened two restaurants in the latter, Bistrot Cinq and Nokiate, which were recently sold.  Now residing in both Guatemala and Montauk, Haas is quickly adapting to the local fare available on Long Island, like his quintessential Hamptons summer meal: lobster.

So what would a dish that encapsulated the essence of Chef Haas look like?

"Something simple with seasonal seafood and local produce."

Sounds like a perfect fit for that used-to-be-fishing-town we know as Montauk.  He brings this simple, local flare to the menu at MYC, describing the dishes as, yep you guessed it, "local, seasonal, and lots of seafood."  A favorite right now?  Butter Poached Lobster.  (We've tried it, and must agree: delicious).

And for a final hurrah, we asked the chef what all the girls here are dying to know: if the way to a man's heart is through his stomach, what exactly would that meal look like?  Well, for Haas:

"Steak, Lobster, off the grill, with great wines."

Hey, sounds simple enough!  Not that we're trying...this grillmaster not only works hard as a chef, but also as a husband and father.  You can check out his simple and delicious summer fare at the Montauk Yacht Club all summer long, then whip out your skinny jeans and flannel for the NYC meets MYC party every Saturday night.

[Photo 1 via Facebook, all others Food Photos by Rob Rich]