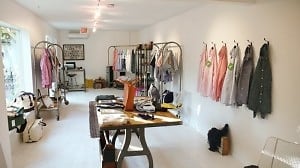 Back in May we were all so excited to break out the summer wardrobe, from wedges to whites to bright, colorful prints defining Hamptons chic. Well, with only two weeks left, we've scoured the stores out East for the top fashions that will take you through the last sunny days and into the turn of the seasons.

Vineyard Vines is the perfect combination of Hamptons style with its comfortable clothing, bright hues, and preppy panache for women, men and children. Who can resist the colorful printed swim trunks, belts, and shorts with the popular whale insignia? SO Hamptons.

There was something missing in the Hamptons...that is, until one of the world's top fashion labels opened a store in East Hampton. We consider ourselves lucky, as it's one of four stores nationwide and the second store in the East Coast. The boutique's interior of lime green and white has an art deco feel - as if you've walked into South Beach's Delano Hotel. The space is a collaboration between artistic director Nicholas Ghesquiere and the French artist Dominique Gonzalez-Foerster. So take a look before summer ends at the must-have shades and "It" bags from the luxe Parisian brand.

Collette is a boutique where you can score designer handbags and shoes in mint condition - Chanel, Prada, Pucci, Gucci, Jimmy Choo - you name it it's there for up to 30-40% off retail price. 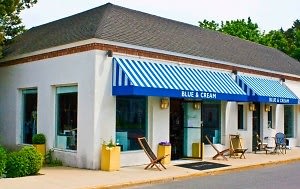 If you want the latest and trendiest looks for the weekend make sure to go to Blue & Cream. Opened in 2004, the boutique features designers such as Temperley London, Phillip Lim, Zac Posen, Herve Leger, Elizabeth & James, and, well, basically any designer that's "so hot right now." With an east-meets-west sort of feel, you can find an outfit appropriate for anything from clubbing to charity events. Check out the website at www.blueandcream.com to preview the goods before visiting the store.

Socialite turned fashion designer Tory Burch's put-together looks are quintessential for Hamptons summers, from day into night. Shop at the East Hampton store for bohemian embroidered tunics, sequined mini-dresses and Reva ballet flats that can be pulled off by absolutely anyone.

Carrying labels like rag & bone, the eco-friendly Generation Love, A.P.C., and, of course, its very own Tenet brand, the shop in the former BookHampton space on Main Street offers trendy, downtown styles in a comfortable and rustic atmosphere. Fall styles are already making an appearance on the racks, with cropped cashmere for women and dark plaids for men topping our must-haves list. Stop by this weekend for a special event featuring Timo Weiland and art from Bridgehampton's NOT A GALLERY.

[Tenet Southampton Mixes It Up On Main Street] 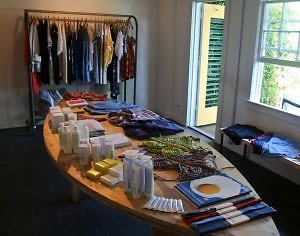 Certainly not the traditional Hamptons styles found dotting Main Street, EDITION has everything the fashionable man needs for a wardrobe worthy of parties from beaches to Brooklyn. Opened in Southampton last year, owner Peter Hananel now runs both the flagship and a Montauk outpost at Sole East Resort. And though focused on high-quality, contemporary mens labels like Band of Outsiders, Our Legacy, and Steven Alan, the fairer sex can also peruse an extensive selection of womenswear including A.P.C., Vena Cava, TOMS Shoes, and even hand-chosen vintage pieces.