Americans love burgers. What's more patriotic than an outdoor barbecue in the summer, chowing down on some burgers and beers with family and friends? Nothing. So when we found out that the chef who had been whipping up delicious classic burgers for us at the brand spanking new Banzai Burger was Argentinian, we had to meet him.

Chef Alan Hughes has been in the business for about two decades and acquired experience from kitchens all over the world, including, but not limited to, Spain, France, Jamaica, Mexico, Haiti, New York and Miami. His work at Banzai Burger has brought him out the the Hamptons for the first time, "When I was in New York, there was something about the word 'Montauk' that made me not want to come here. It's stupid, right?" 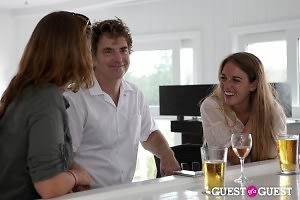 When asked how he liked his burgers prepared, Chef Hughes told us, "I’m very straightforward on a lot of things. I love my classic burger; good bacon, good cheddar." Sounds a lot like the Classic Burger on the menu that is always my personal go-to. But no Banzai Burger is complete without being accompanied by some herb fries, which will disappear quicker than you could even imagine because they are that good. Hughes explained to us that when he owned a restaurant in Miami, "Those fries were like the rave of the restaurant, so when I was here, he (friend and co-owner Alex Duff) asked me to do them." So although he isn't American, he sure does know how to please us Yankees,

"That has been the biggest compliment. I'm here in the USA cooking for an American and they tell me this is the best burger they have ever had."

But what is Chef Alan Hughes doing when he's not whipping up a burger? He is in a band called Alan Hughes and the Peruvian Hookers, writing a book called Sex, Kitchen and Rock & Roll and going on lots of fishing trips. No, but really.