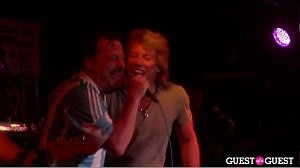 Despite the "threat" of Earl on Friday, a small crowd braved the pouring rain to pack into Stephen Talkhouse to catch the annual appearance of Southside Johnny Lyon, “the best damn white blues singer on the planet," and a very special guest...

Johnny Lyon is a 61-year-old, blue-eyed soul, whiskey-and-gin-soaked singer who never quite made it out of Bruce Springsteen’s shadow to become a commercial success. But don't let that status fool you, he's a grizzled New Jersey rocker with a cult following who puts on one of the best live shows imaginable.

"Oh Guest of a Guest? That's for Mercedes people. I drive a Toyota Rav-4," Lyon said after the show. He continued:

"But why do I keep coming back to Talkhouse? Because they pay us. And also, it’s a great gig. The only bad thing about Stephen Talkhouse is the getting out here and getting around. Now tomorrow, we’re supposed to catch the ferry from Orient Point to go and play in Massachusetts. And for the last five days we’ve been worried about whether it’s going to run or not because of the hurricane. It’s the logistics of the thing. Out here, you’re way out in the middle of nowhere. It’s a great nowhere, but we have to move around, so it’s not that easy to get from here to anywhere or from anywhere to here." 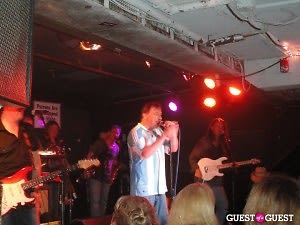 But he consistently makes the trek, meeting up with close friend Jon Bon Jovi, who he often stays with after performances.

“Jon Bon Jovi has a house out here and usually I spend a night with him, and that’s usually fun because his kids are great. He sucks, but his kids are great,” Lyon said of his decades-old friend. Bon Jovi got into the business because of Lyon, once saying, “I've always wanted to be a Juke…and I still do.”

In his not-such-a-surprise guest appearance, Bon Jovi –  who has also acknowledged Lyon as his “reason for singing,” – jumped on stage to duet on “Talk to Me,” a Springsteen-penned blues song about a cold woman, and returned to the stage later to deliver him a drink from the bar.

“Your shoelaces are untied,” Lyon said to Bon Jovi in the middle of the song, pretending to kick him when he looked down. “Where’d you get that shirt, prison?” Bon Jovi retorted.

In reality, Lyon, who is often referred to as the “Grandfather of the New Jersey sound,” never quite achieved the success garnered by Bon Jovi or Springsteen, even though the three Jersey icons collaborate often and have traded backing artists with one another through the years. 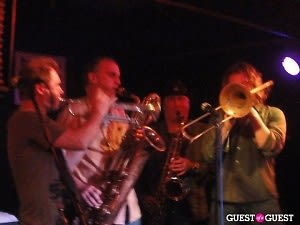 Which is not to say Lyon never made his mark. The congenial, acerbically-witted rocker – who resembles an angular, floppy-haired Baldwin brother – has put out more than thirty albums and still sells out shows today, performing annual concerts in Asbury Park, at New York’s B.B. Kings and at venues across Europe. He's had missteps – the disco-fabulous, unabashedly ‘80s album “Trash it Up” was made during a dark time, he’s said, that included feelings of detachment and too much alcohol – but his catalogue still holds up, and his albums are highly rated on Amazon.

Now, 40 years, 400 songs, thousands of shows and two ex-wives later, Lyon records on his own label, Leroy Records, which he founded in 2001. But in the face of the commercial structure of the music industry, it all comes down to playing what he loves, Lyon said:

“After 40 years on the road, you don’t learn any other trade. Because anything else you would do would be just killing time. Working in a factory or post office or something. So you don’t have to do that. All you have to do is drive to Amagansett and drive back and eat baloney on a roll for 14 days in a row, but you get onstage and have a great time and a great audience and it makes it all worthwhile. Tonight was great fun. So we get paid to have a great time. Not a lot, but we get paid enough to keep going.”