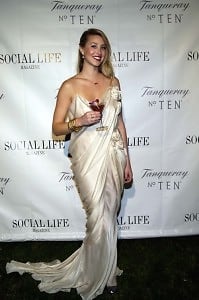 After experiencing the hyperbolic preppiness that was the Unruly Heir trunk show, Doug Marshall, his sig o, and I made our way over to Devorah Rose's Social Life Estate. Our journey was not exactly the smoothest, but after 20,489,096 audacious U-turns and 30 minutes entertaining the Southampton Hess station attendants with our skillful turn at the gas pump, we arrived at the Estate's luxury car-crammed lane.

While it's a bit premature to say that this was the glam party of the season, there's no doubt it'll be hard to top. Not only did Devorah get Tattinger, Tanqueray No. TEN, and Peroni to sponsor (we counted four bars!), girl also went all out on the decor (private, raised cabanas, oversized chaise lounges, red votives) and the canapes (Kobe beef lollipops, lobster and brie frittatas, duck and cashew spring rolls), plus, via helicopter, Whitney Port from the Hills (and on the cover of Social Life) as host.

Whitney was sporting a scarlet mouth and a long, champagne-silk gown that dipped low in the back --a get up that really stood out in a sea of perma-tanned knees and natural make-up and DanniJo gold crisscrossed about her wrist. Other admirable, don't-know-if-we-have-the-cahones-to-pull-off ensembles were Tracy Stern's gold-buttoned trench and rope sandals, Emily Brill's royal-blue and hot pink princess shift with hot pink pumps (dunno about the white sunglasses at night thing though), Jill Zarin's lime green and plum crepe de chine coatdress and, of course, Doug's Greenwich Prom '56 meets Little Lord Fauntelroy get-up of black bermudas, a red and white gingham button-down, black blazer, and black patent-leather loafers.

The gracious hostess herself was all copper limbs, black chiffon, and these awesome black flats with satin flowers crawling up them (flat, though she assured us she'd been wearing heels until seconds before our arrival). I'd been pretty nervous about this event beforehand, envisioning hours of awkward eye-catching and general wall-hugging, but, thanks in large part to my exuberant co-worker and his equallyso coterie I ended up feeling loathe to leave. Only when the last of the La Playa-bound revelers had abandoned their pool-side perches did I hit up the goodie bag room and head on home.