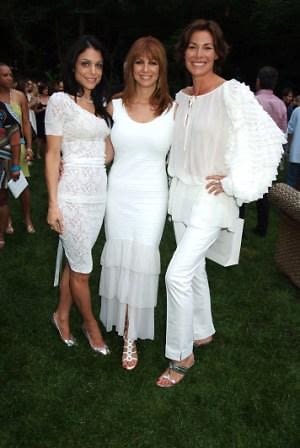 Remember on one of the first episodes of the REAL HOUSEWIVES of MANHATTAN we were taken to Jill Zarin’s Hamptons' home, given a glimpse of the splendor in which she lives, and were invited in to see the way she and her friends ‘roll’ in the Hamptons (events, private parties and great restaurants)? Well, if someone had told me I would be standing on the Zarin’s backyard lawn exactly four months later, celebrating the 4th of July with the Zarins, their friends and (most of) the cast of the REAL HOUSEWIVES, I would not have believed it.

More story and photos (by Rob Rich) below:

To be in the center of what I thought was just an aspiration four months ago, well, this was a personal milestone for me. I have to admit, when I got a personal invite from Jill to attend ‘Jill and Bobby Zarin’s Annual 4th of July Backyard Party’ at their immaculate estate out east, I was flattered, excited and totally THERE!

Like Jill (my favorite HOUSEWIFE), the party was fun and over the top, possessing a very friendly vibe. Not a detail was spared, from the Salmon and Lobster Salads as passed hours d’ouvres (in martini glasses), to the signature Bethenny inspired Skinny Girl and Lychee Martinis (yes, we saw lychee martinis in action in the first season) down to the desert bar with brownies, warm chocolate chip cookies and TEAM JILL pink and white cookies accented with HEAPING punch bowls filled with chocolate and vanilla ice cream.

This was amazing. There was dancing by the pool as pictures of guests flashed up on a HUGE projection screen. Everything was as perfect as the guest list itself. When it started to rain Jill reached for the microphone and said, “Don’t leave, just go inside and enjoy some dessert”. It’s that sort of laid back and fun loving attitude that I can get down with. The sign of a good party is having a hostess who is able to trust the guests inside her home!

Of course my favorite 4th of July celebrants were the beautiful housewives themselves –stunning, fun, and all in white - though not ALL of the quintuplet housewives were there. Scandal or coincidence? Jill Zarin, Bethenny Frankel and Countess LuAnn De Lesseps WERE there. Ramona Singer and Alex McCord (and Simon) were not. I didn’t ask why, because hopefully the WHY will surface on an upcoming episode in season two!