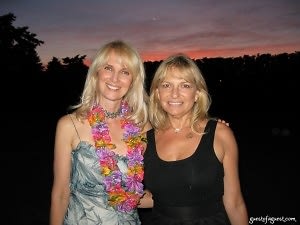 Sara Herbert-Galloway accompanied by her children Alana and Justin opened the doors of their stately Southampton home to about 50 friends on Friday July 11th . The elegant soiree was held in her backyard lined with tiki torches, roses, hydrangeas, and lit lanterns streaming from the trees. Tony award winnng producer Stewart and Bonnie Lane arrived from London with news of the opening of their most recent show.