I pulled up to the Cruickshank's residence with the 4th of July party in full swing. It looked and felt like an overdue reunion. Everyone was munching on hamburgers and hot dogs and drinking delicious cocktails. There were definitely some cutting-edge fashion ensembles in the backyard and the music was better than anything you've heard at any nightclub recently, courtesy of DJ Vibe, Max Barbaria, Annabelle Dexter-Jones, and a few sets by Poppa Cruickshanks.

More story and photo below: 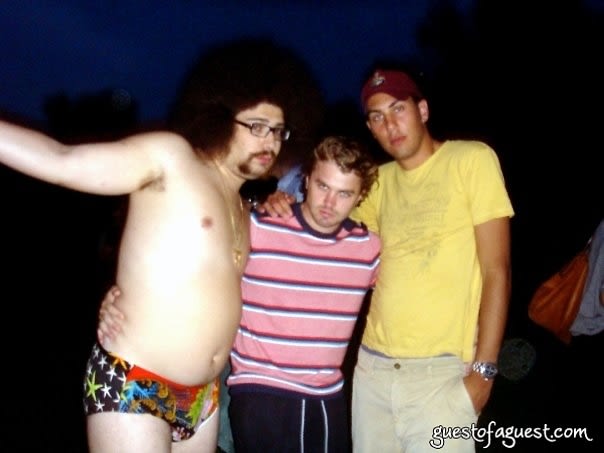 People were in the pool, on the grass, and just relaxing on the patio. The fireworks may have surprised a few people but the guests had a few surprises of their own. Model Amanda Shine took a walk on the brunette side and turned even more heads than usual, while Joshua O from Team Facelift was there his signature look: a speedo, glasses, and a huge afro.

Paul Longo from Sir Drake and Emmett Shine from LOLA spent a lot of time talking, probably planning their takeover of the fashion industry. Curator Tripoli Patterson was giving Travis Pastrana a run for his money on the dirt bikes and a bearded Baron Von Fancy was also in attendance.

As for James Cruickshanks? He was a fantastic host. There's a reason why this was his 3rd consecutive party and I can't wait for next year's.