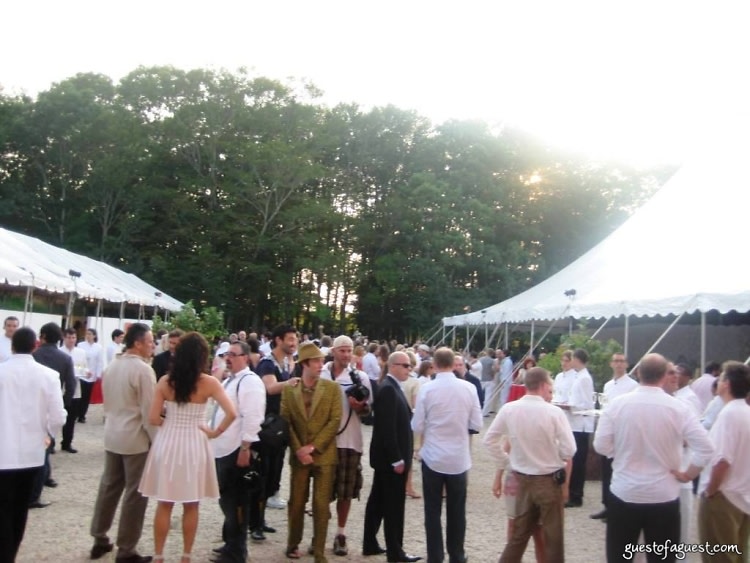 Such were the words spread out like blood on the once-pristine white walls inside Robert Wilson's main building of the Watermill Center. The prolific German artist Jonathan Meese created the installation: Marlene Dietrich in Dr. No's Ludovico-Clinic (Dr. Baby's Erzland). And:

If this party is any kind of taste into the propaganda he is describing, consider me sold.  It was, by far, the most interesting party I've been to this summer.

The adventure began as soon as we left our car.  I was with Nick Dietz, whom I had run into at Super Saturday and who, I agreed, just HAD to be my date later that night. Walking up the long entryway, bordered with torches, tall grass, and performers on stilts wowing us with their unique noises, we had no idea what could possibly be in store for us next, but we were excited.

We crossed over the entrance of stones (no small feet for me in my high shoes), and into the main cocktail area where the cast of characters proved delicious.

There were eccentric outfits, beautiful colors, and dozens of creative ensembles.  I was in Keith Lissner's fabulous leopard print gown.  There were bars everywhere with waiters that looked like they had stepped directly out of an Abercrombie catalog, and, besides Jonathan Meese's installment inside, there were tons of art showcased in an outdoor gallery connected to the patio and LIVE art around every corner.

The best part of this party was the trail that led us through the woods with surprises around every corner.  Live artists, not once coming out of character, entertained us as we trotted along the twisty path; meeting the heads of the theater, art, fashion, design and society worlds along the way.  After that, we headed to the building where, after broswing through art books with Dan Honan in the library, we entered the main room inside the center where we got to meet the artist himself.

Dinner was starting and the tent looked grand.  So many amazingly talented people under one canopy, I found myself feeling extremely lucky as I realized at once that this was, without a doubt, the best party going on in the entire world at that time.  And what a world I was witnessing.  The live auction hosted by Simon de Pury wrapped up with a live horse being auctioned off (went to Vanessa Von Bismark for $30k), just in time to get some twirls on the dance floor.  Guests that we found ourselves rubbing elbows with included:

This will definitely be an evening I will remember....as I will forever think of the Watermill Center as being home to the most beautiful party in the Hamptons.  How's that for propaganda?

Go HERE to see a recap by the lovely Jada Yuan.

Go look at our gallery for loads of more photos from this event!